Multiple Facebook posts in South Korea claim that sex hormones determine how viewers perceive the colour of a shoe featured in an old viral meme. But these posts are misleading: vision and neurology experts told AFP there is no credible evidence that sex hormones influence the way people perceive colour. 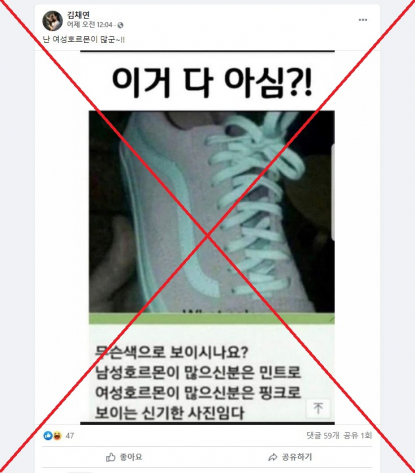 The post features a photo of a shoe that has surfaced online years ago, when social media users could not agree on its colour.

Some people saw the shoe as grey and mint while others saw pink and white, according to this report.

A similar claim that sex hormones determine how viewers perceive the colour of the shoe has been shared in Facebook posts here, here, here and here.

However, these posts are misleading according to vision and neurology specialists.

“Men and women with normal vision won’t see colours differently because of differences in their sex hormones,” Dr Lee Sung-jin, an ophthalmologist at the Soon Chung Hyang University, told AFP on June 30.

“Among people with normal trichromatic colour-vision genes, I do not believe there is evidence that colours are perceived differently between the sexes,” Dr Bevil Conway, a neuroscientist at the US National Eye Institute, told AFP on June 30.

Multiple keyword searches on the Google Scholar database did not find any credible studies supporting the claim that sex hormones produce different perceptions of colour.

Differing perceptions of the shoe colour could be attributed to how the brain responds to light, Professor Kwak Young-shin, an expert in colour studies at Ulsan National Institute of Science and Technology, told AFP.

“This phenomenon… occurs both as a natural result of our visual system adjusting its sensitivity to certain colours in order to balance out the signals received,” she said on June 29.

“Our brains have the ability to discern whether the object seen is a certain colour, or whether the lighting makes it appear so.”

“In [the case of the viral shoe photo] the viewer unconsciously perceives the object in the photo as being under natural or artificial light, and that difference can translate into different colours being perceived.”