A researcher working with Doctor Paul McKay (unseen), who is working on an vaccine for the 2019-nCoV strain of the novel coronavirus, Covid-19. ( AFP / Tolga AKMEN)

Multiple Facebook posts have shared a purported letter from a top British scientist detailing plans for a “permanent lockdown of the UK''. The posts are misleading: the scientist's employer, a British university, said the purported letter was "disinformation". The posts contained a link to the anonymous online forum 4Chan, which regularly promotes conspiracy theories. As of June 29, 2021 the UK government has signalled that it plans to further relax pandemic restrictions in England.

The image was shared by a New Zealand based user here on June 21, 2021 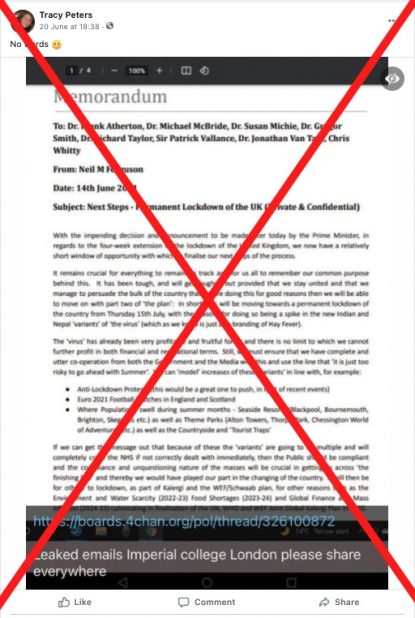 It purports to show a letter addressed to British physicians and epidemiologists from “Neil M Ferguson” on June 14, 2021.

Professor Neil Ferguson is an epidemiologist at the UK university, Imperial College London.

He resigned from a key UK government panel as an adviser on coronavirus lockdown measures in May 2020 following media reports he had allowed a woman to visit him at home. AFP reported on the story here.

In the misleading posts, the purported letter reads: “Next Steps - Permanent Lockdown of the UK (Private and Confidential)".

It states the UK will be “moving towards a permanent lockdown” from July 15.

“With the reason for doing so being a spike in the new Indian and Nepal ‘variants’ of ‘the virus’ (which as we know is just a re-branding of hay fever),” the purported letter reads.

The Indian Covid-19 variant, also known as the Delta variant, is a more contagious variant of Covid-19.

The so-called Nepal variant is a mutation of the Delta variant, as outlined in this article by the Australian news outlet The Conversation.

The image, however, has been fabricated.

The purported letter includes a hyperlink to this thread deleted on anonymous online forum 4Chan. It is well known for promoting conspiracy theories.

As of June 29, 2021, no such announcement of a "permanent lockdown of the UK" has been shared by the UK government's Department of Health and Social Care (DHSC).

In response to the misleading posts, Imperial College London published this statement on its website on June 18, 2021, explaining the image was "fake".

“This fake memo entitled 'Next Steps - Permanent Lockdown of the UK (Private & Confidential)' was not written by Neil Ferguson,” it reads.

“This totally untrue piece of disinformation was constructed and spread by extremists and has no association with Imperial College London, the UK government, or its scientific advisors".

Different levels of restrictions have been enforced for Wales, Scotland and Northern Ireland, but as of June 29, there have been no announcements indicating plans for a "permanent lockdown of the UK".