Skip to main content
A policeman stands guard at a roadblock during a government-imposed nationwide COVID-19 lockdown in New Delhi on April 9, 2020. (AFP / Jewel Samad)

A claim that the entire Indian capital region including New Delhi will be placed under a “complete lockdown” for four weeks beginning June 18 has been shared in multiple posts on Facebook and Twitter. The claim is false; as of June 19 no fresh lockdown has been announced in India, and government officials have said that no such plan was under consideration. 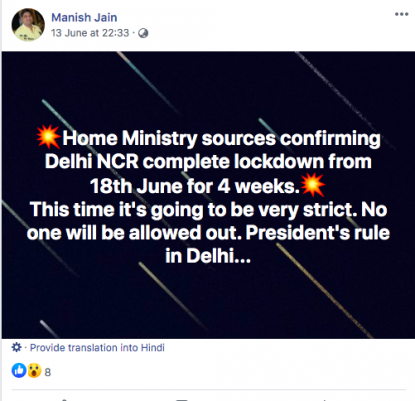 The post states: “Home Ministry sources confirming Delhi NCR complete lockdown from 18th June for 4 week.s This time it’s going to be very strict. No one will be allowed out. President’s rule in Delhi...”

Delhi NCR is a reference to India’s National Capital Region, which includes the capital city of New Delhi and several other districts from neighbouring states.

The post circulated just days after Delhi and states across India re-opened after a 10-week lockdown due to the COVID-19 pandemic, as reported by AFP here.

However claim is false; as of June 19, 2020 India has not announced a new lockdown and several government officials issued statements denying the claim.

It reads, in part: “There is no such plan under consideration. Please beware of rumour mongers.”

Claim: A message on Facebook claiming strict #Lockdown from 18th June. #PIBFactCheck: It's #Fake. There is no such plan under consideration. Please beware of rumour mongers. pic.twitter.com/NqSXOpy9n9

Many people are speculating whether another lockdown in Delhi in being planned. There are no such plans.