A TikTok video shared thousands of times alleges that drinking a mixture of bitter kola and lemon juice will “enlarge the male genital for increased pleasure during sexual activity (sic)”. But the claim has no foundation according to experts. Doctors say the size of a man’s penis is determined by genetics and cannot be made bigger with herbal remedies.

‘Gbol* (or gbola) is Yoruba street slang for a penis in Nigeria.

A woman in the clip explains in Yoruba that her advice will help men with small genitals. 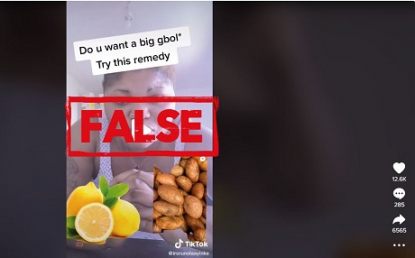 A screenshot of the false TikTok Video, taken on October 31, 2022

“I want you to help me get bitter kola and lemon, get five or six pieces of bitter kola and get water from squeezed lemon. Use this water to blend the bitter cola, and drink half a glass of it every morning. As you are drinking it, the genital would become larger, until it reaches the size the person wants,” she says.

The TikTok account sharing the video has more than 90,000 followers and a history of promoting content about herbal mixtures.

In 2020, a similar claim also appeared on Facebook and a Ghanaian news blog.

But experts say there is no substance to the assertion.

The flowering plant had no libidinous effect when tested on rats, according to a 2012 study by the University of Ilorin in Nigeria and published in the African Journal of Traditional, Complementary and Alternative Medicines.

“This study has thus revealed that aqueous seed extract of G. kola did not possess aphrodisiac activity as claimed and may not explain the consumption of the seeds mainly by the aged,” the study’s authors said. “Furthermore, the results taken together discourage the continued claim or assumption of Garcinia kola seeds as an aphrodisiac.”

Samuel Aluko, a doctor at the Federal Medical Center in Owo, Ondo state, said the size of an individual’s genitals is based on physiology, genetics, body build-up and human development during infancy.

“Mixtures such as bitter kola and lemon juice do not work, and studies have not shown this [to work],” he told AFP Fact Check.

However, he noted there was documented evidence of the medical properties of bitter kola in diabetic control and for antibacterial and anti-malarial treatment.