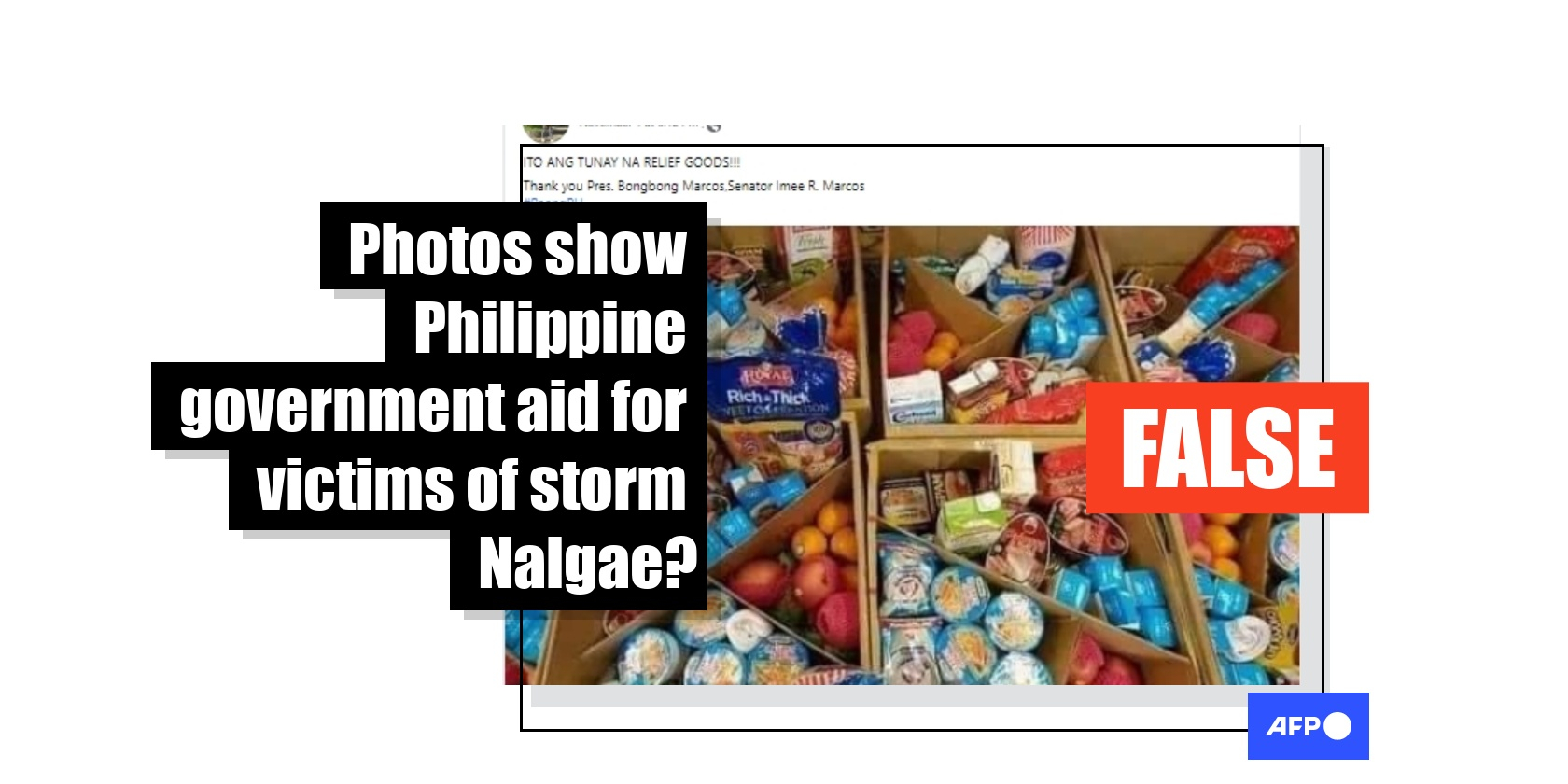 Several photos have been shared in Philippine social media posts that falsely claim they show relief goods distributed by the president's sister, Senator Imee Marcos, after the country was hit by Severe Tropical Storm Nalgae in late October 2022. The images in fact predate Nalgae. They show pandemic aid packages distributed in April 2021 and Senator Marcos at a relief drive for a different typhoon in early October 2022.

The four photos were posted on Facebook on November 1.

Two of the photos show packages of food, while the other two photos appear to show Senator Marcos -- sister of President Ferdinand "Bongbong" Marcos Jr -- and lawmaker Emerson "Emeng" Pascual distributing food at an event.

"THESE ARE WHAT REAL RELIEF GOODS SHOULD LOOK LIKE!!!", the post's Tagalog-language caption claims. 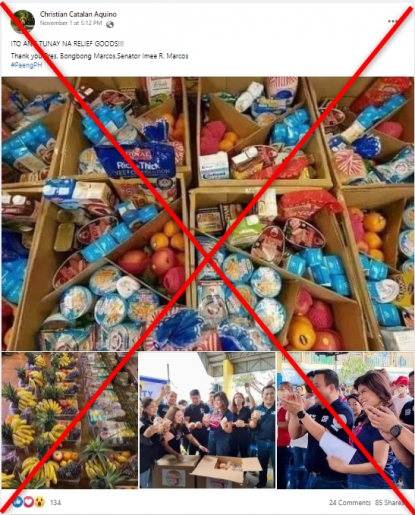 The post circulated after Nalgae battered the archipelago in late October, triggering floods and landslides.

More than 150 people were killed, according to the National Disaster Risk Reduction and Management Council.

The same set of images were also shared alongside a similar claim on TikTok and Facebook here and here.

Comments to the posts suggest some users thought the images were taken in the aftermath of Nalgae.

"I've never seen relief like this before. It's different from the usual rice, water and canned goods…It's more than the usual and you can't ignore that it's upgraded", one wrote.

"No one can beat the Marcoses when it comes to assistance", another commented.

But reverse image searches on Google -- combined with keyword searches -- found the photos in the posts are unrelated to Nalgae.

The photo showing the boxes of food was taken from the Facebook page of congressman Emerson Pascual.

It is part of a set of photos published on April 1, 2021, when Pascual was the mayor of the northern city of Gapan.

The photos are captioned in part: "Continuous service for those in Gapan who are Covid-19 positive.

"Even on holy week our frontliners are not taking rest just to distribute aid for people in Gapan."

The second photo -- showing fruit and canned goods -- was taken from a Facebook post by broadcaster News5 on April 9, 2021.

According to News5, the photo shows gift packs for Gapan's "Covid-19 frontliners" -- given by the local government on the Day of Valour to thank them "for their dedication to the work".

Below are screenshot comparisons of the photos used in the false posts (left) and the original photos (right): 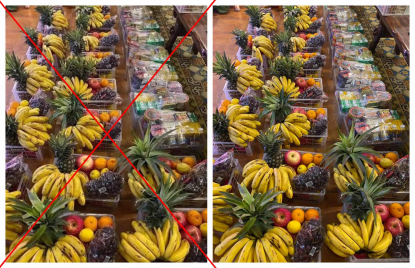 The photos showing Pascual with Senator Imee Marcos were taken from a Facebook post from October 4, 2022 that was published by a government official of Nueva Ecija province, where Gapan is located.

The post's caption states it shows relief operations for Super Typhoon Noru -- referred to by its local name "Karding" -- which barrelled through the country in late September.

Below are screenshot comparisons of the photos in the false posts (left) and the images shared by Marcos (right): 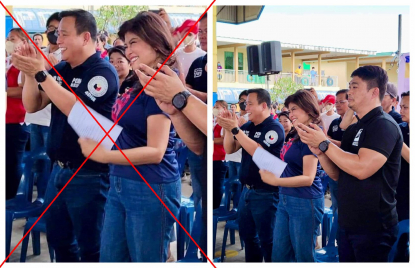 Some 20 typhoons strike the Philippines each year.

Scientists have warned that deadly and destructive storms are becoming more powerful as the world gets warmer because of climate change.