Photos taken from space of old typhoons have resurfaced on social media, racking up thousands of shares in posts that falsely claim they show Severe Tropical Storm Nalgae which slammed into the Philippines in October 2022. Nalgae -- known locally as Paeng -- killed over 150 people and caused widespread destruction in the archipelago. The photos in fact show Typhoon Trami, which was also known locally as Paeng but made landfall in 2018, and Typhoon Maysak, which struck the Philippines in 2015.

The photos have been shared over 8,000 times since they were posted on Facebook on October 29, 2022.

"Paeng" is the local name for Nalgae, a powerful storm that triggered flooding and landslides across the Philippines in late October and killed over 150 people.

The post goes on to say: "It was called TYPHOON TRAMI, captured by German astronaut Alexander Gerst and describe the typhoon rendered in the images as pulling 'the planet’s gigantic plug. 'As if somebody pulled the planet's gigantic plug'."

The post also quotes Gerst as saying, "Staring down the eye of yet another fierce storm. Category 5 Super Typhoon Trami is unstoppable and heading for Japan and Taiwan. Be safe down there!" 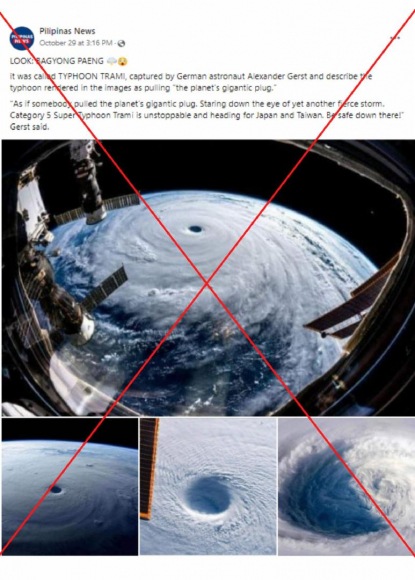 Comments from some social media users indicate they believed the claim.

"It got even bigger and stronger," said one social media user.

"Please keep us safe, Lord. Spare us," another wrote.

Reverse searches on Google, however, found the photos had been shared in a false context.

Two of the photos had previously been shared by German astronaut Alexander Gerst in a tweet about Typhoon Trami on September 26, 2018 -- and by the European Space Agency the same year here and here.

Gerst's caption for the photos was directly copied in the false posts about Nalgae.

The Philippines assigns typhoons a name from a list of 25 names -- one for each letter of the alphabet except 'X'. There are four lists, and these are rotated every year.

A typhoon that causes more than 300 deaths or a billion pesos ($51 million) worth of damage will have its name "retired".

According to the country's weather agency, Trami did not cause significant damage in the archipelago, so its local name "Paeng" remained in the country's list of typhoon names.

Below is a screenshot comparison showing the photos used in a false context in social media posts (left) and the photos of Trami posted on Twitter by Gerst (right): 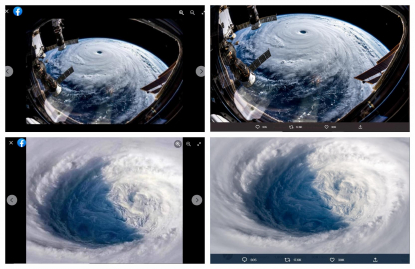 The other two photos shared in the false social media post were taken in 2015, and show Typhoon Maysak -- a super typhoon that ravaged the Federated States of Micronesia.

It weakened into a tropical storm and made landfall in the northern Philippines, where it left minimal damage.

One photo, credited to astronaut Terry Virts, was posted on the verified Facebook page of the International Space Station on April 1, 2015.

A reverse image search found the last photo in the archive of photo agency Alamy.

The photo is titled, "Maysak seen from the ISS" and is credited as having come from the NASA Image Collection.

Below is a screenshot comparison of the photo as it appears in the false social media posts (left) and as it appears on the Alamy website (right): 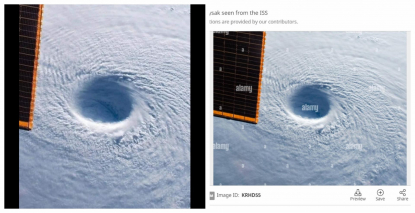 Not a 'super typhoon'

The social media posts include a quote about the storm being a "super typhoon", but Nalgae did not meet the criteria to be categorised as a super typhoon.

The Philippines only classifies storms that have a maximum wind speed in excess of 185 kilometres per hour as "super typhoons".

Nalgae remained a "severe tropical storm" when it exited the Philippines on October 31, packing maximum sustained winds of up to 110 kilometres per hour, according the country's weather agency.

The storm then headed towards mainland China -- not Japan or Taiwan, as the quote in the posts says -- and weakened into an area of low pressure over the western part of Guangdong, according to the Hong Kong Observatory.