After a powerful earthquake jolted Taiwan on September 18, a video that appeared to show the Taipei 101 skyscraper swaying dramatically racked up tens of thousands of views in posts claiming it showed genuine footage from the quake. However, the tower's management debunked the "animated video", which surfaced online before the earthquake struck.

"On September 18, a 6.8-magnitude earthquake occurred in Taitung. Bridges broke, houses collapsed, and Taipei -- hundreds of kilometres away -- felt the power of the earthquake," reads a traditional Chinese Facebook post shared on September 20.

"This is how the landmark Taipei 101 building shook during the earthquake."

The video appears to show the Taipei 101 tower, the world's tallest building before it was overtaken by Dubai's Burj Khalifa, swaying back and forth. 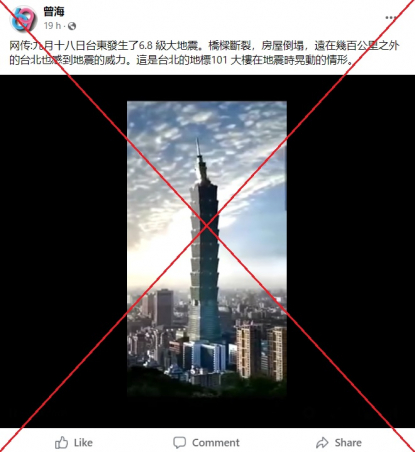 The same video attracted more than 150,000 views in similar posts on Facebook, Twitter, TikTok and the Chinese version of TikTok, Douyin.

A strong earthquake struck southeastern Taiwan on September 18, tearing up roads and bringing down a handful of houses in the town of Yuli where at least one person was killed.

The quake, which hit about 50 kilometres (30 miles) north of the city of Taitung, was initially recorded as magnitude 7.2, but the United States Geological Survey later downgraded it to a 6.9-magnitude quake. Taiwan's weather bureau recorded it as 6.8-magnitude.

Some social media users appeared to believe the footage genuinely showed Taipei 101 struck by the quake.

"People inside must have been so scared," one comment read.

Another remarked that the "quality of Taiwan's high-rise buildings" seemed "really good".

However, the footage is fake.

A version of the clip shared online shows the handle of a TikTok user called 李舞雄 in the bottom-left corner of the video.

A search of the TikTok account found the video posted on August 17, weeks before the quake struck.

Replying to comments about the video, the TikToker said it showed "special effects".

A closer analysis of the video shows that a residential building close to Taipei 101 does not appear in the footage. The building was completed in 2021, according to Taiwanese property news site PLEX.

The building is visible in an advertisement for a watch exhibition that the tower hosted, which was posted online on August 16. 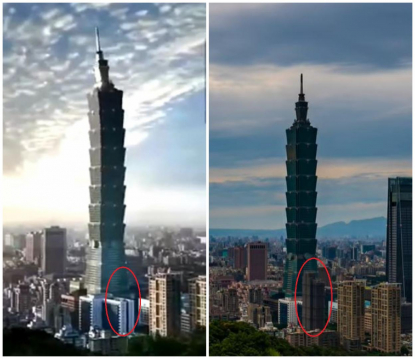 The building is also visible on Google Earth, with the imagery from 2018 showing it while it was under construction.

Furthermore, Taipei 101's management team published a statement saying the footage did not show the tower.

"Following the 6.8-magnitude earthquake in Taitung today (9/18), an animated video of Taipei 101 shaking from the earthquake circulated multiple times on the Internet and social media," it said.

"This content is obviously inconsistent with the facts, so we would like to clarify this to avoid any public misunderstanding. Please stop sharing this rumour."

Meanwhile, local news media reported that there genuinely was shaking inside the skyscraper during the earthquake.

Footage broadcast by TVBS News showed the giant golden ball beneath the observatory deck swaying during the tremor.

The ball acts as a counterweight to offset movement caused by quakes.

The fake video of the tower was also debunked by Taiwanese fact-checking organisation MyGoPen.