An image shared in Ethiopia purporting to show Jal Mero, a famous Oromo rebel and head of the Oromo Liberation Army (OLA), has been making rounds on Facebook in Ethiopia alongside a claim that he was recently interviewed by CNN. However, the claim is false; the image was doctored using an interview of another Oromo rebel by another TV channel.

The image shows Jal with a CNN microphone directed toward him, as if he was being interviewed by the American broadcaster. CNN’s logo is also featured on the bottom right corner of the image.

The post’s caption, written in Oromo, translates to English as: “The hero is roaring on CNN, without talking to Abiy, they talked to the hero in the forest. He said that they will control Finfinne (Addis Ababa) in the near future.”

Rumours of the rebel leader’s death circulated in Ethiopia in December 2020 when, according to some local media, he was killed during a military operation in the Ethiopian region of Wollega. However, Jal appeared in a televised interview with Al Jazeera in March 2021, during which he denounced the media for “blindly accusing the OLA” of committing atrocities in Ethiopia’s Amhara region.

This Facebook post surfaced after the OLA pledged allegiance to the rebel army of the Tigray People’s Liberation Front (TPLF) in late August 2021.

The TPLF has been at the center of a nearly year-long conflict that left thousands dead and millions displaced, according to the United Nations.

The conflict began in November 2020, when the Ethiopian Prime Minister sent troops to the northern region to topple the TPLF leadership. The move came after a military camp was attacked by TPLF soldiers.

However, the claim that the Oromo rebel leader was recently interviewed by CNN is false and the image used to buttress the claim was doctored.

AFP Fact Check ran a reverse image search of the image posted on Facebook and found that Jal’s face was digitally added onto another person's body. The CNN logo was also added onto the picture.

The image was taken from a video report by the Oromo Media Network (OMN), a US-based Ethiopian news channel founded by Ethiopian opposition leader Jawar Mohammed, who was arrested in July 2020. The video was posted on OMN’s official YouTube page on February 22, 2019.

At the five-minute mark, an Oromo rebel speaks with an OMN journalist. The mic features the OMN logo.

The soldier’s clothing, the lapel mic placed on his collar, and the background scenery all match the doctored image. The soldier is wearing a headwrap, part of which is still visible in the doctored image because Jal’s digitally superimposed head does not entirely cover it. 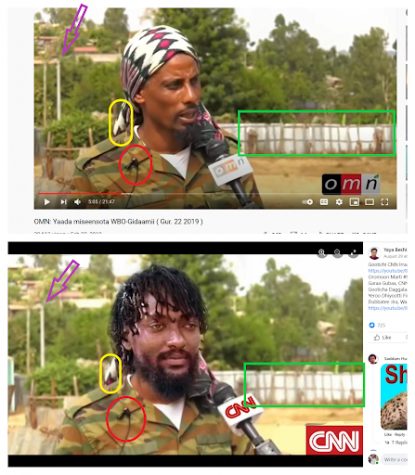 The OMN logo was digitally replaced by CNN’s, both on the mic and in the bottom-right corner of the image.

The photo of Jal used to create this doctored image has been shared online many times in the past, including in posts dating back to 2020 (here, here, and here).