A video has been viewed thousands of times in multiple posts on Facebook alongside a claim that it shows an armed robbery attempt at a clinic in Malaysia. The claim is false: the CCTV footage shows gunmen attempting to rob a mattress store in Brazil in June 2021. 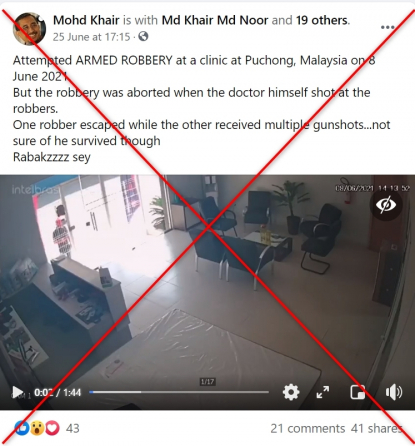 The post’s caption reads: “Attempted ARMED ROBBERY at a clinic at Puchong, Malaysia on 8 June 2021.

“But the robbery was aborted when the doctor himself shot at the robbers.

“One robber escaped while the other received multiple gunshots...not sure of he survived though
Rabakzzzz sey (sic)”.

The video has been viewed more than 4,000 times after it was shared on Facebook with a similar claim here and here.

It also appeared here and here, with a claim that the incident happened in Johor Bahru, a city in Malaysia.

A reverse image search on Google found the video has appeared in this report from Brazilian news portal G1 on June 9, 2021.

The title, translated from Portuguese to English, states: “VIDEO: Shop owner reacts to robbery and shoots robbers who broke into mattress store in RO.”

RO stands for Rondonia, a state in northern Brazil.

The first two paragraphs read: “The owner of a mattress store shot two armed robbers who invaded his establishment, in the Nova Brasília neighborhood, in Ji-Parana (RO). CCTV cameras recorded the action.

“According to the police report, the case occurred on Tuesday afternoon (June 8), after the first criminal arrived at the establishment posing as a customer. As soon as the merchant's daughter opened the shop door, the man entered and announced the robbery.”

According to the report, one of the assailants died in hospital while undergoing surgery, while another one was taken to a hospital in a neighbouring city.

The same video was also uploaded by Brazilian media Band Jornalismo here on its official YouTube channel on June 10, 2021.

Malaysian police issued a statement on June 29, 2021, on its Facebook page here and here that the incident happened overseas, not in Puchong.