Two videos that show hot air balloon accidents have been viewed thousands of times in Facebook posts that claim these happened during 2022 New Year celebrations in Myanmar. However, both clips are several years old and have previously circulated in social media posts about accidents during Myanmar's fire balloon festival held every November.

The first video has been viewed more than 1,300 times after it was posted on Facebook here on January 3, 2022.

It shows a beige hot air balloon failing to take off and sending a ball of fire at a sea of spectators.

Translated from Malaysian to English, the post's caption and the text superimposed above the video state: "Tragedy near New Year 2022".

Text on the bottom part of the video reads: "When a party became a tragedy .. New Year celebration in Myanmar .. a firecracker explosion fell in the middle of thousands of spectators."

The video was also shared with a similar claim here, where it has been watched more than 5,200 times. 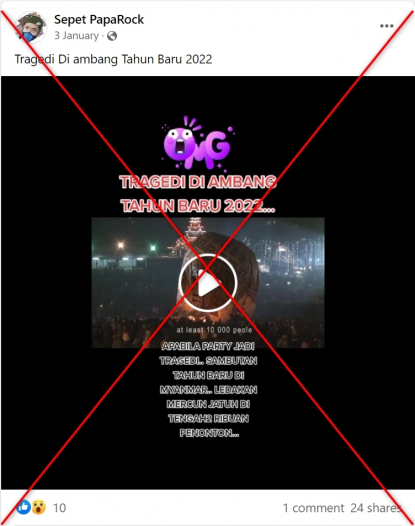 Screenshot of the first misleading post, taken on February 11, 2022

The second video was posted on Facebook here on January 1, 2022.

The video, which shows a red hot air balloon crashing to the ground, has been viewed more than 9,200 times.

Its caption states in part: "HAPPY NEW YEARRRR", while the text superimposed on the footage reads: "Myanmar fireworks, exploded among spectators." 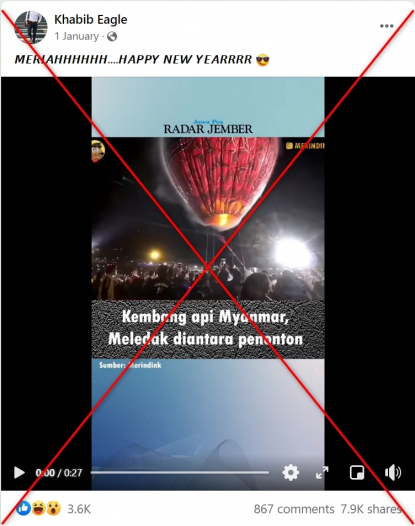 Screenshot of the second misleading post, taken on February 11, 2022

In reality, both videos have circulated in old posts about balloon accidents in Myanmar -- and were not filmed during New Year's 2022 as the false posts claim.

Reverse image and keyword searches found the first video corresponds to a longer video that was published on YouTube here on April 8, 2011, with a title: "Balloon crash during festival in Myanmar".

When contacted by AFP, the YouTube user Kaspars Ulsts said he took the video and it does not show "new year 2022".

The Burmese text on the balloon reads: "Tazaungdaing Festival" and "1372", the Burmese year which corresponds with the year 2010 in the Gregorian calendar.

Similar visuals can be seen in this photo taken at the 2010 balloon festival.

Myanmar's fire balloon festival, held every November in Taunggyi, the capital of Shan state, is the highlight of the Tazaungdaing festival of light that marks the end of the rainy season, AFP reported here.

During the days-long festival, huge homemade hot-air balloons carrying fireworks and candles are set off above crowds of revellers.

Below is a screenshot comparison of the video in the misleading post (L), the genuine YouTube video (C) and the 2010 photo (R), with identical features marked by AFP:

Screenshot comparison of the video in the first misleading post (L), the genuine YouTube video (C) and the 2010 photo (R)

Further reverse image and keyword searches found the second video corresponds to this video published on YouTube on November 15, 2018, with the title: "Balloon Crash at Taunggyi Fire Balloon Festival".

Below is a screenshot comparison of the video in the second misleading post (L) and the 2018 YouTube video (R):

The incident was also captured from another angle in another YouTube video, posted here by a user called Kyaw Kyaw Win on the same date.

The video is titled: "Taunggyi Hot air balloon accident", and the caption says the clip was taken by Kyaw Kyaw Win.

The Burmese-language subtitles in the video include this sentence: "The accident happened on November 14, 2018, and it was the balloon named 'Dat Khae Mee'."

At least two people were seriously injured when a frame carrying 50 kg of fireworks fell from the fire balloon belonging to the Dat Khae team onto a crowd of spectators on that day, regional media The Irrawaddy reported.

Below is a screenshot comparison of the video in the second misleading post (L), the 2018 YouTube video (C) and the second 2018 clip (R), with identical features marked by AFP:

Screenshot comparison of the video in the second misleading post (L), the genuine 2018 YouTube video (C) and the second 2018 clip (R)