Several media outlets in Bangladesh published reports that claim Saudi Arabia plans to remove an Islamic oath from the country's flag. The claim is misleading; the reports from Bangladesh cited Saudi state media that only reported on a draft amendment approved in late January 2022 to regulate the use of the flag, not its contents. As of February 15, 2022, AFP found no official reports of the kingdom planning to change its flag design.

The report, titled "Kalima Tayyiba will be removed from Saudi Arabia's flag", was published by Bangladeshi online news portal Banglanews24.com on February 6, 2022.

The Kalima Tayyiba, an Arabic phrase that means "the blessed word", refers to the Islamic declaration of faith that translates to: "There is no god but Allah, and Mohammed is the messenger of Allah."

The statement, also known as the Shahadah, is emblazoned on Saudi Arabia's green flag above a sword. 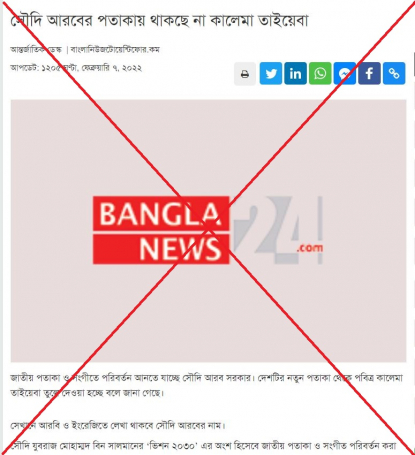 A screenshot of the report published on February 7, 2022 by Bangladeshi online news portal Banglanews24.com

"The Saudi government is going to change the national flag and anthem. It was reported the Kalima Tayyiba is being removed from the new flag of [Saudi Arabia]. Instead, the name of the country will be written [on the flag] in both Arabic and English", the report said, citing the state-run Saudi Press Agency (SPA).

Other media outlets, also citing Saudi Arabia's state media such as SPA, claimed that the kingdom’s top advisory body Shura Council voted to approve a draft amendment allowing the alleged removal of the Islamic oath in the flag, as seen in reports here, here and here in Bengali, and here and here in English.

The claim has also been shared here in a Facebook post viewed more than five million times.

Saudi Arabia's Shura Council approved a draft amendment of the country’s Law of the Flag on January 31, 2022, aiming to revise regulations on the use of the flag, not its contents, according to various reports from state and local media.

"Saudi Arabia’s Shoura Council approved on Monday, by a majority vote, draft amendment to the law of the national flag, emblem and the national anthem but not to their contents", the Saudi Gazette newspaper reported.

The report said the proposed changes aimed to define the proper uses of the flag, emblem and national anthem, and "enhance awareness about the importance of the flag and anthem and protect the flag from infringement or neglect."

The SPA reported on January 31 that the draft amendment had been approved by the council, with no mention of the misleading claim that the Islamic oath would be removed from the flag.

AFP found no other reference to the issue from SPA's official website.

The Associated Press news agency also quoted state media reports which said the changes did not affect the flag design.

The pan-Arab newspaper Asharq Al-Awsat reported: “The amendment will be limited to the flag, emblem and national anthem system without prejudice to the content or form of any of them.”

A check of the current version of the Law of the Flag by AFP did not find any changes as of February 15, 2022.

AFP found no official reports of the Saudi Arabia's top advisory body proposing on changes of the flag design.