Facebook posts circulating in multiple languages purport to show a photo of Rayan Oram, a five-year old Moroccan boy who died after falling down a well in February 2022, sparking a rescue operation that gripped the world but ended in tragedy. However, the photo in the posts predates Rayan's death and has circulated in news reports since January 2022 about a boy injured in a road crash in the United States.

The photo shows a young boy in hospital wearing a neck brace and with injuries to his face and head. 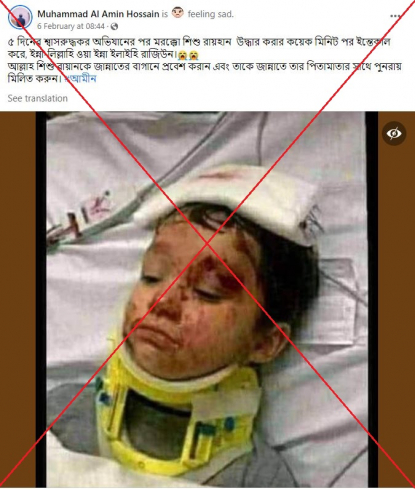 Morocco was left in shock after five-year-old Rayan Oram was found dead at the bottom of a well in a tragic end to a five-day rescue operation that gripped the world.

The boy's father said he had been repairing the well when he fell in on February 1, 2022 in the village of Ighrane in the Rif mountains of northern Morocco.

The image was shared in similar Facebook posts in Arabic and French.

A reverse image search found the photo published in an article from January 21 -- more than one week before Rayan fell down the well -- about a boy injured in a car crash in the US state of North Carolina.

"A 6-year-old boy injured in a wrong-way crash on I-40 is home from the hospital, his mother told WFMY News 2," local news outlet WFMY News 2 reported.

Below is a screenshot comparison of the image in the false post (left) and from WFMY News 2 (right).

The news outlet rejected false claims about the image in a report here on February 6.

"A photo of a Triad child car wreck victim is being mislabeled as the child that fell down the well in Morocco," it said. 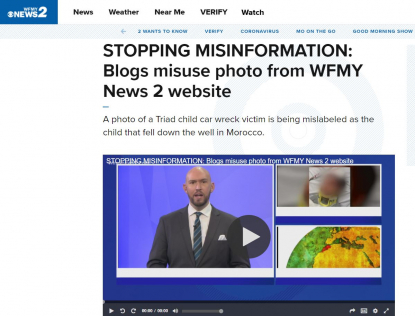 Screenshot of a WFMY News 2 report debunking the false claim, taken on February 9, 2022