Skip to main content
Saudi women enter a movie theatre at a cinema in the Saudi capital Riyadh, on June 22, 2020 as cinemas re-opened following the lifting of a lockdown due to the COVID-19 coronavirus pandemic. ( AFP / FAYEZ NURELDINE)

Saudi Arabia did not 'ban cinemas in January 2022'

Facebook posts shared hundreds of times in January 2022 claimed Saudi Arabia had permanently banned cinemas from operating in the kingdom, reversing a 2017 decision to allow them to operate. These posts are false; as of February 16, 2022, Saudi Arabia's entertainment authority has not announced any ban on cinemas. Two cinema chains told AFP they continue to operate in the kingdom and were selling tickets for cinema showings as of February 16.

It has been shared more than 400 times.

The Hindi-language post translates to English as: "Breaking news, Saudi Arabia has decided to impose a permanent ban on cinema halls. Now Saudi will be like it was previously, the blessing of Allah remains upon us." 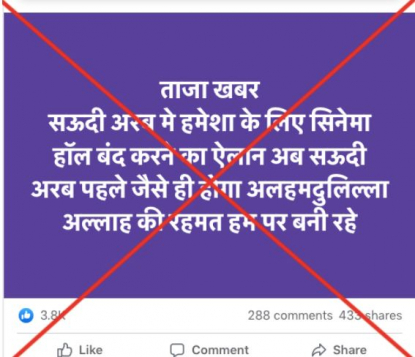 A screenshot of the misleading post taken on February 7, 2022.

Saudi Arabia lifted a decades-long ban on cinemas in late 2017, part of a series of social reforms in the ultra-conservative kingdom, AFP reported.

It has since seen significant growth in movie ticket sales, with revenue totalling $238 million in 2021, a 95 per cent increase from the previous year, Variety magazine reported.

Similar posts have also been shared on Facebook here and here.

However, Saudi Arabia's General Entertainment Authority has not announced any permanent ban on cinemas on its website as of February 16, 2022.

Vox Cinemas, which runs a chain of cinemas across the Middle East and North Africa region including in Saudi Arabia, said on February 10: "Cinemas are running as usual and claims are false."

AMC Cinemas, which operates ten movie theatres in the kingdom including in the capital Riyadh, said on February 10: "It is not true that we have closed down, we are still operating as you can see on our website, we have multilabel movies and showtimes."

AFP also found both cinema operators were still selling movie tickets in Saudi Arabia on their websites as of February 16, 2022.