A video showing dozens of trucks driving through a town and honking was shared thousands of times alongside claims it shows Italian truckers inspired by a convoy of Canadians who drove to Ottawa in 2022 to protest Covid-19 vaccine mandates. This is false; the video was taken in September 2021 during a city festival in the Piedmont region of Italy.

"First it was Canada, and now Italy," says the text above a video shared on Facebook in late January 2022.

In the video, also shared here, dozens of trucks are seen slowly parading through a city street, honking along the way under the enthusiastic watch of locals. 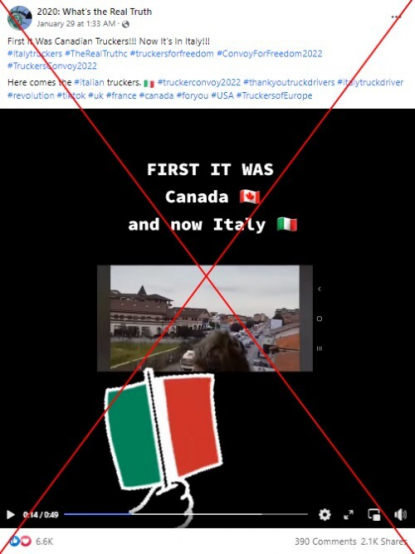 The timing of the post and the caption suggest that the Italian event is imitating a convoy of Canadian truckers who drove, some from as far as the western province of British Columbia, to protest in the capital Ottawa.

The so-called "Freedom Convoy 2022" originated as a protest against Covid-19 vaccine mandates for truckers crossing the US-Canada border, but has become a rallying point for those frustrated with ongoing federal and provincial efforts to mitigate the spread of the virus.

However, an AFP search for the origin of the video found that the truckers in Italy were not demonstrating against vaccine mandates.

Road signs visible in the video and seen on Google Maps show that it was shot in a street of the Italian town of Carmagnola, in the Piedmont region near Torino.

An internet search for the words "Carmagnola camion" (truck in Italian), reveals that the city hosts a truck show once a year. The video was shot on September 25, 2021 during Carmagnola's annual Saint Michael festival which has brought a truck show to the small town for the past seven years.

Contacted by AFP, a city official said: "The San Michael festival has nothing to do with protests against the Green Pass (proof of vaccination against Covid-19 in Italy)."

Italian fact-checking website facta.news pointed out other footage of the truck parade here and here in a fact-check after the convoy was falsely presented as a protest against Italy's Green Pass.

Although the truckers in the video were not protesting Italy's vaccine mandates, Canada's "Freedom Convoy 2022" did inspire similar actions abroad.

In one case, Australian truckers organized a convoy to the national parliament building in Canberra.

AFP Fact Check has identified other posts falsely sharing images unrelated to the "Freedom Convoy 2022," and debunked the false claim that traffic cameras were disabled in Ontario to keep the public from seeing popular support for the movement.