An image of a social media post that appears to be from Canadian Prime Minister Justin Trudeau and urges people to shun unvaccinated family members is circulating online. But Trudeau's office says he did not post the message, and there is no trace of it on his official social media accounts.

"Who is dividing who?! Absolutely Sickening that this POS is running our country. Of course this was deleted not long after it was posted but thank god someone got a screenshot of this," says a February 2, 2022 Facebook post.

It includes an image of the alleged post from Trudeau, which says: "The Convoy to Ottawa 2022 thing needs to stop. They are dividing Canada and we need to be United. Everyone knows I am the Prime-Minister that is about unity and inclusion."

"Please help do your part to make this stop: if you have family or friends that still haven't been vaccinated, do not allow them to family dinners, do not speak to them on the phone, do not reply to their texts. You need to do everything you can to make life difficult for them until they comply," it adds. 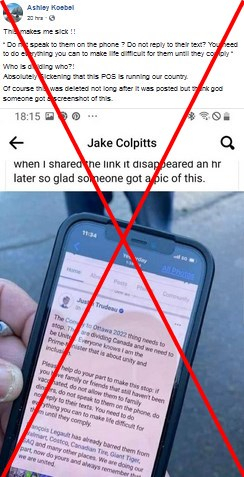 According to his office, it was not posted by Trudeau or his team. It has been edited to look like it originated from his official Facebook account.

It spread online as truckers drove to Ottawa to protest a Covid-19 vaccine mandate that took effect on January 15 in Canada and on January 22 in the United States. The convoy has become a rallying point for those opposed to government public health measures that aim to curb the spread of Covid-19.

On January 29 and 30, local police estimated that as many as 15,000 people protested in front of the Canadian Parliament. Ottawa Deputy Police Chief Trish Ferguson said that "a highly determined" group of protesters remained in the capitol city as of February 3.

Trudeau has made no moves to meet or negotiate with the demonstrators, whom he has referred to as a "fringe minority."

Most of the public health measures throughout the pandemic have been enacted provincially, but the federal government has made Covid-19 vaccination mandatory for federally regulated transportation employees and travelers.

In January, Trudeau said he believed Canadians were "angry" and "frustrated" with unvaccinated people.

As of late January, 88 percent of the Canadian population aged five or older had received at least one dose of a Covid-19 vaccine.

The "Freedom Convoy" and protests in Ottawa that followed have led to other online misinformation. AFP Fact Check's reporting from Canada is available here.