A health worker shows a box containing a bottle of ivermectin in Cali, Colombia, on July 21, 2020 ( AFP / Luis Robayo)

Global news agency Reuters published an article that said a Japanese company found ivermectin to be effective against the Omicron variant of the coronavirus in human trials. The article was corrected to say that trials were non-clinical, meaning they did not test on people, but social media posts are still spreading the article's original incorrect assertion that the drug was proven effective against Covid-19 in human test subjects.

It was later corrected to say: "Ivermectin shows 'antiviral effect' against COVID, Japanese company says," and the second paragraph now notes: "The original Reuters story misstated that ivermectin was 'effective' against Omicron in Phase III clinical trials, which are conducted in humans." 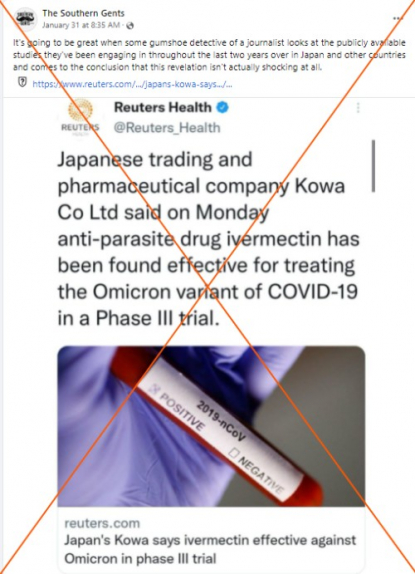 The claim also appeared on Facebook here and in an online article here.

A Kowa press release says: "Kowa confirmed that the investigational drug ivermectin, which is being used in a Phase III clinical trial (development code: K-237) for the treatment of SARS-CoV-2 infection has the same antiviral effect against the Omicron variant as the existing mutant variants (alpha, beta, gamma and delta) in a joint study with Kitasato University (non-clinical study)."

A company spokesman confirmed that "non-clinical" refers to a study with test tubes, not human patients.

Ivermectin is approved for human use in the United States as an antiparasitic to treat infections including those caused by some worms and head lice, but US health authorities have not authorized it to treat Covid-19.

The drug is regularly the subject of misinformation online, and a spike in ivermectin prescriptions in 2021 prompted the US Centers for Disease Control and Prevention to release a statement warning of the potential harmful effects of the drug if misused.

There was particular concern over an increase in severe illnesses due to people self-medicating with veterinary ivermectin.

There is broad medical consensus that ivermectin should not currently be used for Covid-19 treatment outside of clinical trials, several of which are ongoing.

The US Food and Drug Administration (FDA) website says that "while preclinical research answers basic questions about a drug's safety, it is not a substitute for studies of ways the drug will interact with the human body. 'Clinical research' refers to studies, or trials, that are done in people."

According to the FDA, Phase III clinical trials should involve between 300 and 3,000 volunteers who have the disease or condition and last one to four years.

AFP has debunked other inaccurate claims about Covid-19 here.