Skip to main content
A pasenger pulls her roller suitcase on arrival in Terminal 5 at Heathrow airport in London, on June 3, 2021. ( AFP / Daniel LEAL)

Facebook posts circulating in February 2022 claim a string of countries including Turkey, Brazil and Britain have scrapped "all quarantine procedures" and Covid-19 testing. The posts — shared hundreds of times on Facebook and Twitter — claim that ten countries have decided to treat the virus as though it is a "seasonal flu". The claims are misleading; many of the countries included in the list still have Covid-19 quarantine and testing procedures for incoming travellers, as of February 26, 2022.

"The following countries announced the cancellation of all quarantine procedures, Corona tests, and compulsory vaccination, and considering Corona just a seasonal flu," reads a Facebook post shared on February 1, 2022. 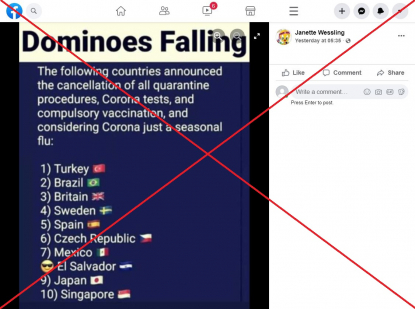 Quarantine procedures were still in force in Brazil, Japan and Turkey for some travellers as of February 26, 2022.

In Britain, travellers who are fully vaccinated with an approved vaccine and are not arriving from a red list country do not need to take a Covid-19 test before travelling to England, Wales, Scotland and Northern Ireland, according to the latest government guidance from February 11.

Brazil requires all travellers arriving by air to show proof of vaccination, according to the latest guidance published on January 20.

While some nations have made Covid-19 vaccination compulsory for their adult population, none of the countries in the list circulating online had done so as of February 26, 2022.

Countries including Spain and the Czech Republic have ruled out vaccine mandates.

The UK government said on January 31 it would scrap a vaccine requirement for healthcare workers.

Some of the countries listed in the posts have genuinely announced they plan to treat Covid-19 like seasonal flu, but the health measures in many states were still evolving as of late February.

World Health Organization chief Tedros Adhanom Ghebreyesus said in January 2022 that the pandemic was "nowhere near over" and that new variants of the virus were still "likely to emerge".

In the same month, Spain spearheaded calls for governments to start tackling the virus like a seasonal flu, despite warnings from some parts of the medical community that the move was premature.

However, it still records Covid-19 cases and requires people to self-isolate if they test positive as of February 26.

In England, Prime Minister Boris Johnson scrapped all pandemic legal curbs from February 24, urging a shift from government invervention to personal responsibility as the country begins to "treat Covid as other infectious diseases such as flu".

Sweden lifted pandemic restrictions on February 9 and said it would downgrade Covid-19 to a "notifiable disease" like the flu.

Singapore said in May 2021 it would transition to living with the virus, but postponed the easing of restrictions in January 2022 as case numbers surged.

AFP found no official reports that the other countries on the list said they would move towards treating Covid-19 like the flu as of February 26.