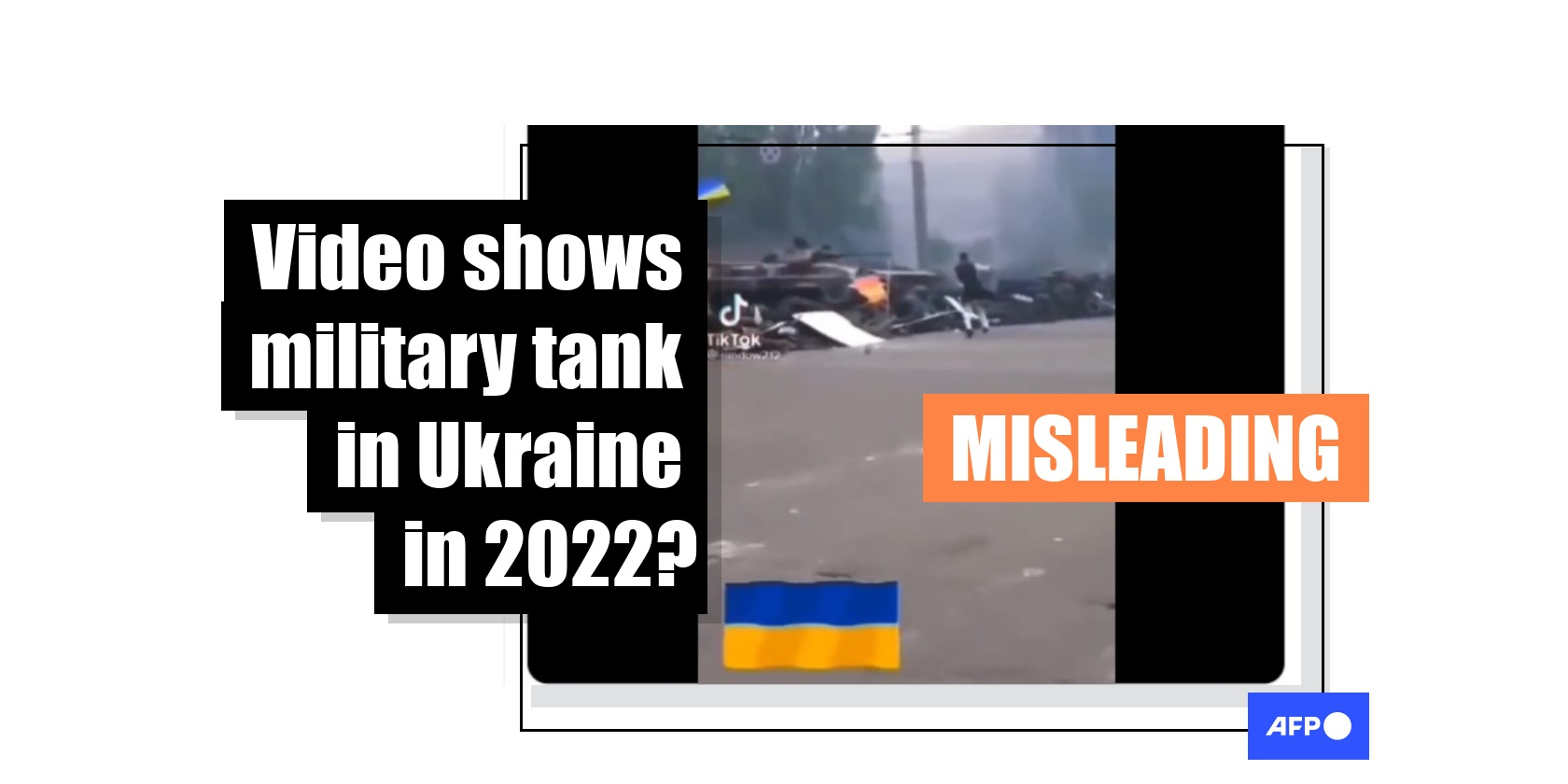 This video was filmed years before the 2022 Ukraine-Russia crisis

A video that shows a military tank hurtling down the street has been viewed thousands of times in social media posts that claim it was filmed in Ukraine in January 2022, after Western leaders sounded the alarm over a potential Russian invasion. The posts are misleading; the footage was filmed in May 2014, when deadly clashes erupted between Ukrainian troops and separatists in the city of Mariupol.

"The situation in Ukraine is dangerous, armoured vehicles are speeding through the streets, and a war is sparked soon?" reads a simplified Chinese tweet posted on January 25, 2022.

A screenshot of the misleading post taken on February 1, 2022

The video was shared in various posts on Twitter, Facebook and Weibo which also claimed it was filmed in Ukraine in January 2022.

Russia has deployed more than 100,000 heavily armed troops around Ukraine. The United States and its allies accuse Moscow of preparing to invade the former Soviet republic, which has ambitions of joining Western institutions, including NATO.

Moscow denies any plans to invade but is demanding that Ukraine never be allowed to join NATO and a series of other security guarantees against the US-led military alliance's expansion in the ex-Soviet bloc.

Ukraine warned any military confrontation with Russia would amount to "full-scale war" in Europe, while also attempting to reach an agreement with Russia on a diplomatic level.

Keyword searches on Google found a longer version of the video posted on YouTube on May 10, 2014 by Russian state media RT.

BMD is a type of Soviet military vehicle.

Below is a screenshot comparison between the video in misleading posts (left) and RT's video (right).

A reverse image search found similar video published in a BBC News report from May 9, 2014 about a deadly shoot-out between Ukrainian troops and separatists in Mariupol.

Below is a screenshot comparison between the video in the misleading posts (left) and the BBC's video (right) with similarities circled in red by AFP:

AFP reported on the fighting in which 21 people were killed, according to Ukraine's interior minister.

"An attempt by around 60 rebels armed with automatic weapons to storm the police headquarters turned into a "full-scale military clash" when army and interior ministry troop reinforcements arrived," the report reads.

"Witnesses in Mariupol told AFP the fighting was ferocious and involved an exchange of automatic gunfire and shelling from eight armoured vehicles. The police headquarters was gutted by fire and, after the battle, firemen were at the scene trying to extinguish the flames."

The street in the video shared in the misleading posts corresponds with Yandex Street View imagery from 2012 of Мariupol's Central district.

Below is a screenshot comparison of the video in the misleading post (left) and the Yandex Map (right).

A screenshot comparison of the video in the misleading post (left) and the Yandex Map (right) with similarities circled in red by AFP.

Moreover, Google Street View images of the same location in Ukraine shows the Platinum Bank seen in the video had been changed to a beauty salon in July 2021, indicating that the footage is not from January 2022.