Skip to main content
A man walks past a bollard painted to represent a cigarette butt to raise awareness about new 'no smoking' zones in Sydney on September 26, 2016. ( AFP / SAEED KHAN)

Social media posts circulating in Australia claim a new blood clot warning was added to the country's tobacco packaging in January 2022 -- which they suggest is linked to the rollout of Covid-19 vaccines. But the posts are misleading: the blood clot warning predates the pandemic, a tobacco control organisation told AFP. The warning is based on a decade-old law, Australia's health department separately told AFP.

It has been retweeted more than 2,000 times.

The top image is captioned: "Cigarette packet warning label as of Dec 2021".

It shows a yellow label that reads: "WARNING. Tobacco smoke contains a toxic mix of chemicals that cause disease and early death in children and non-smoking adults exposed to the smoke."

The bottom image is captioned: "Cigarette packet warning as at (sic) Jan 2022."

It features a yellow label that reads: "WARNING. Inhaling even small amounts of the toxic chemicals in tobacco smoke can trigger sudden blood clots, heart attacks and strokes." 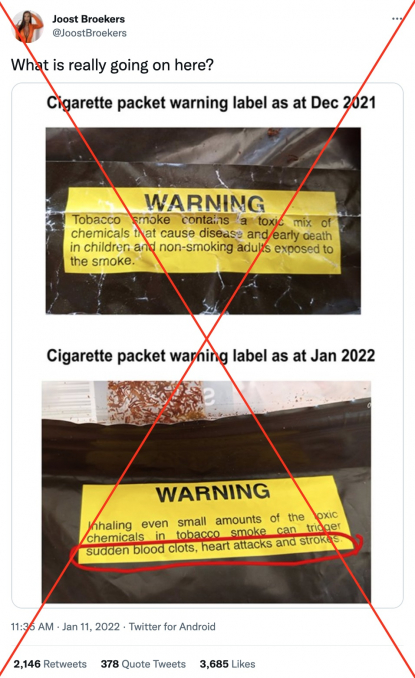 A screenshot of the misleading tweet taken on January 31, 2022.

Similar posts were also shared on Facebook here and here.

The posts circulated online following rare cases of blood clots linked to the AstraZeneca Covid vaccine in Australia, as AFP reported on here.

Comments on the posts indicated some users were misled to believe the image shows a genuine tobacco warning that was added following the rollout of Covid-19 vaccines.

"They will soon blame just about anything but the jab, for what's coming," reads one comment.

The blood clot warning is unrelated to Covid, a spokesperson for Quit Victoria, a nonprofit based in Melbourne that works with the government in tobacco control, told AFP.

"The message about blood clots hasn't just appeared during the pandemic: it has been appearing on Australian cigarette packs for more than nine years," the spokesperson said.

The spokesperson sent an image of a blood clot warning for cigarette packaging from 2016, which corresponds to the bottom image in the misleading post: 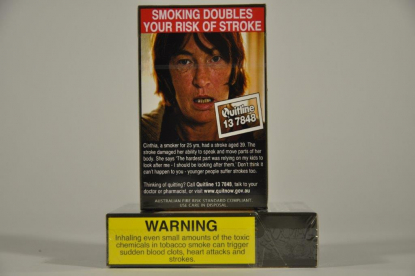 The misleading posts show warnings that have been used on tobacco products since 2012, a representative for Australia's health department separately told AFP.

"These health warnings have been specified in the Information Standard since it came into effect on 1 January 2012," the representative said.

A Google search of the warnings in the social media posts found Australian legislation which contains a set of health warnings for tobacco products.

The relevant law is the Competition and Consumer (Tobacco) Information Standard 2011.

Below are screenshots of the legislation, with the warning text featured in the misleading posts highlighted in red by AFP: 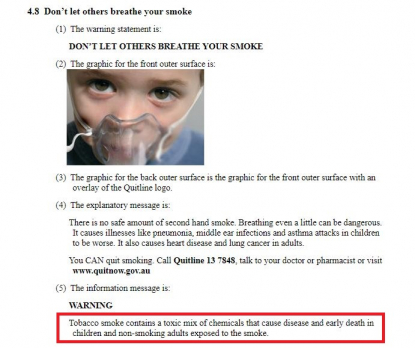 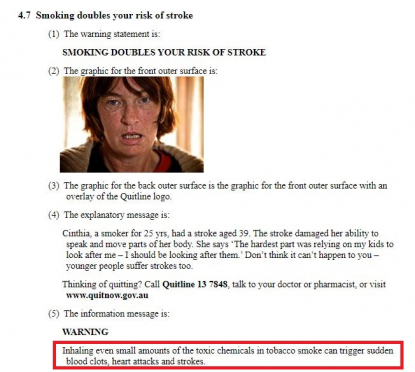