Social media posts claim various famous musicians will follow Neil Young's lead in removing their music from Spotify to protest the platform hosting a popular podcast that has spread inaccurate Covid-19 claims. But only one of the artists named has said she plans to do so, another has denied it, and the rest have not publicly commented on the walkout.

A Facebook post published that same day by Occupy Democrats suggested that Barry Manilow, Peter Frampton and Dolly Parton were also among the Spotify boycotters. It was shared 21,000 times, while a tweet  with the same text garnered more than 6,000 retweets. 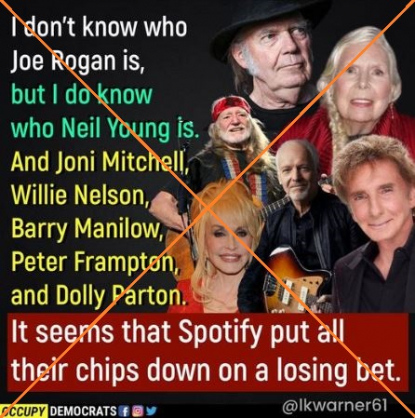 The posts refer to Canadian musician Young's demand in an open letter to Spotify that his music be removed from the platform. Young wrote that he was prompted to action after reading that more than 200 doctors warned Spotify to implement a misinformation policy, with particular concern over claims made about Covid-19 on Joe Rogan's popular podcast.

The singer behind "Heart of Gold" said the platform would have to choose between him and Rogan.

However, claims of a widespread boycott are unfounded and most of the rock, folk, and country musicians named in the posts have not publicly committed to removing their music from the Swedish platform.

As of February 1, Joni Mitchell was the only musician named in the posts to have announced she planned to remove her songs from Spotify.

"I've decided to remove all my music from Spotify. Irresponsible people are spreading lies that are costing people their lives. I stand in solidarity with Neil Young and the global scientific and medical communities on this issue," the Canadian singer-songwriter wrote on her website on January 28.

Barry Manilow was the only musician named to publicly deny the claim. "I recently heard a rumor about me and Spotify I don't know where it started, but it didn't start with me or anyone who represents me," he wrote in a January 28 tweet.

Nils Lofgren, the guitarist in Springsteen's E Street Band, announced on January 29 that he had pulled the last 27 years of his music from Spotify.

However, Springsteen made no such announcement himself, and on February 1, his music was still available on Spotify, including the anthem "Born in the USA," which was recorded with the E Street Band.

English-American singer Peter Frampton did voice support for Young, but he did not announce a withdrawal and his music remains available.

Their labels and agents did not respond to requests for comment by the time of publication.

On January 30, Spotify founder and CEO Daniel Ek published a blog post about the platform's "rules and approach to Covid-19." The rules now include a section addressing "content that promotes dangerous false or dangerous deceptive medical information that may cause offline harm or poses a direct threat to public health."

The rules also say: "Breaking the rules may result in the violative content being removed from Spotify," but the company did not directly address Rogan or whether his existing content would be impacted by the new policies.