This is fictional footage from a 2016 drill, not a recent BBC report on the Ukraine-Russia crisis

Footage of what looks like a news report has been circulating on Facebook in Nigeria claiming to show a BBC reporter broadcasting on the ongoing Ukraine-Russia crisis and warning of an impending nuclear war. But this is false; the video has been online since at least 2016. Furthermore, the BBC confirmed the footage is fictional.

The video, shared on Facebook here and here, opens with a “BBC Breaking News” clip. The reporter in the video warns of an “imminent nuclear attack” and shows purported footage of Russian military firing at NATO (North Atlantic Treaty Organization) forces.

The video then cuts back to the reporter, who says that “thermonuclear bombs of undetermined strength have exploded at NATO regional military headquarters in Brussels and at a major US military and radar base in Wiesbaden, Germany”.

The video was shared with the caption: “Breaking news… British National Emergency 20/01/22 Imminent Nuclear Attack”. It was also posted here but has since been deleted. 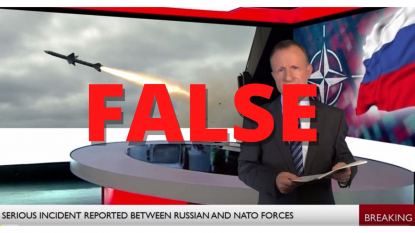 Screenshot taken on January 2018, 2022, showing a scene from the false post

But this video is not a 2022 BBC report. It was created in 2016 and imagines a fictional crisis.

The fabricated video plays off tensions from the ongoing Russia-Ukraine conflict. A build-up of Russian troops on Ukraine’s eastern border has led to fears of an imminent invasion in recent weeks.

Since the Soviet Union dissolved in 1991, Russia has made several moves to take over parts of Ukraine that were formally under its control. In 2014, Russia invaded Crimea, a southern peninsula in Ukraine, and formally annexed the province on March 18, 2018, triggering international condemnation. Ukraine found support in the West, while upsetting Russia over its desire to join NATO, an alliance set up in 1949 as defence against the Soviets.

With the recent crisis, NATO allies are preparing for many possible outcomes, including war, and are also seeking a diplomatic resolution with Russia. The US has rejected Russia’s demand to keep Ukraine out of NATO.

The footage recently circulating on social media is a clip from a 55-minute long video first published in 2016. The BBC first debunked the video here in 2018.

"The video appears to have come from YouTube, where there is a disclaimer about it being a fictional dramatisation," a BBC spokesperson wrote at the time.

This video clip claiming to be a #BBC news report about NATO and Russia has been circulating widely, particularly on WhatsApp. We'd like to make absolutely clear that it's a #fake and does not come from the BBC. #fakenewspic.twitter.com/91lVuTlcBC

The main news presenter in all the videos is an actor known as Mark Ryes, who confirmed to the BBC that he was “just playing a role”.

"It was created by a company called Benchmarking Assessment Group as a psychometric test for their clients to see how they'd react in a disaster scenario,” Ryes added.

AFP Fact Check traced news reports to where the video was first posted here on YouTube. It has since been taken down and the channel removed.