This sword was made centuries after Prophet Mohammed's lifetime

An image has been shared hundreds of times in Facebook posts that claim it shows a sword that belonged to the Prophet Mohammed. The claim is false; the sword was made in late 15th century in Spain under the rule of the Muslim Nasrid dynasty, long after the Prophet Mohammed died in the seventh century.

The post has garnered more than 50,000 interactions, including more than 1,400 shares. 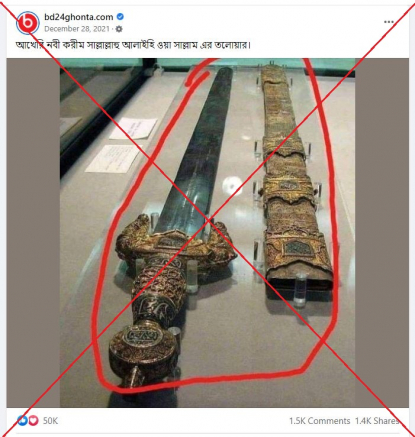 Another Facebook post shared the photo with an English caption saying: “The sword of Hazrat Muhammad (PBUH)”.

“Hazrat” is an honorific Arabic title that Muslims use to honour religious figures including prophets.

Mohammed is the prophet of Islam who is traditionally said to have been born in 570 in Saudi Arabia and to have died in 632.

The photo was also shared here, here and here with similar captions.

The same photo has also been shared here and here with another claim that it shows the sword of Maharana Pratap, an Indian king born around 1540 and known for his resistance against the expansionism of the Mughal empire.

Google reverse image searches found the photo in a tweet that said the sword was a "Boabdil sword" made around 1400 and was preserved at Spain’s Toledo Army Museum.

Contacted by AFP, the Army Museum in Toledo, Spain said that the sword pictured in misleading Facebook posts was owned by France's national library, the Bibliothèque nationale de France (BnF) in Paris. It said that while it owned a similar sword from the same period, it was not the one featured in the misleading claim.

"This sword is not at the Army Museum in Toledo - it is in Paris, at the Cabinet d'Antiques of the National Library - a selection of Ancient, Middle Age and Rennaissance monuments, preserved at the Département des Monnais, Médailles et Antiques”, a spokesperson of the Toledo Army Museum told AFP.

"The Boabdil's jineta sword is a kind of sword. There are 12 of them in the world but only the one in our museum is proven to have belonged to Boabdil."

A representative for the Bibliothèque nationale de France (BnF) said the sword seen in the misleading posts belonged to the institution.

"The sword was loaned to the Louvre Abu Dhabi for three years and was returned to us last year," spokeswoman Elodie Vincent told AFP.

According to the information sheet on the BnF's website, the sword is a 'Boabdil sword' made in the ancient Spanish city of Toledo in around 1480.

The Muslim Nasrid kingdom ruled the Iberian peninsula until 1492, when Muhammad XII of Granada -- commonly know as Boabdil -- was forced to surrender all land to Catholic queen Isabella I of Castile.

"This sword belongs to a group of weapons from the same time [during the Nasrid kingdom], which are mainly preserved in Spanish collections and known as 'Boabdil's swords' after the last Muslim ruler of Granada before the Christian Reconquista at the end of the 15th century," the French description reads.

"Muslim rulers used to honour their emirs with swords, which varied in terms of decoration depending on the person's rank."

The original blade was replaced in the 16th century in Germany, it adds.

Below is a screenshot comparison of the sword in misleading posts (left) and from the BnF (right). 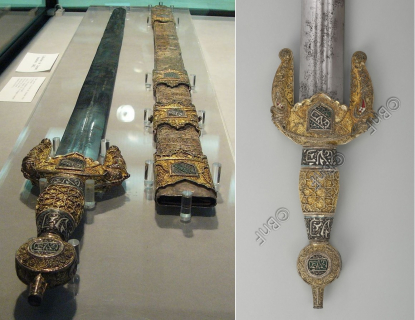 An Arabic inscription on the sword reads "Only Allah is victorious", the motto of the Nasrid dynasty.