Chinese-language social media posts claim Japan has declared a state of emergency following side effects from the Pfizer-BioNTech Covid-19 vaccine. The claim is false; Japan has placed much of the country under a "quasi-state of emergency" to reduce the spread of Covid-19, not because of side effects from vaccines. Moreover, the social media posts show a Japanese poster that contains a string of falsehoods about the virus.

"More and more people in Japan are waking up," reads a tweet in simplified Chinese characters, posted on January 27, 2022.

It has been shared more than 300 times.

The tweet shows a photo of a Japanese-language poster, with Chinese text superimposed that reads: "Japan declared a state of emergency for vaccine side effects and asked Pfizer for compensation, or sued Pfizer for genocide. Japanese hospitals put up notices, asking everyone not to get vaccinated." 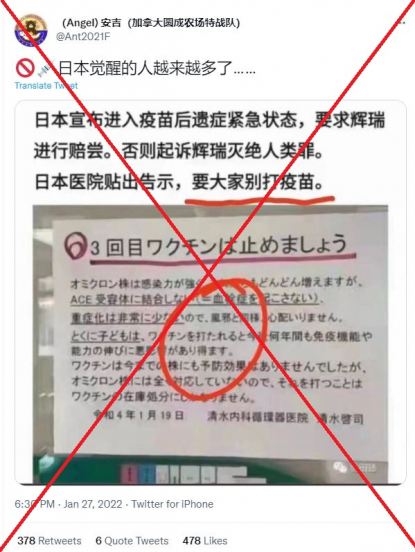 A similar claim has been shared more than 200 times after it circulated on Twitter, Facebook and Gettr, a platform launched in July 2021 by a former Trump adviser.

Japan has placed 35 of its 47 prefectures, including Tokyo, under a quasi-state of emergency as of February 8, 2022.

Less strict than a full state of emergency, the measure encourages precautions such as working from home and avoiding eating out in large groups.

Prime Minister Fumio Kishida said in January 2022 that the restrictions aimed to tackle a surge in Omicron-fuelled infections.

An information page on the Japanese government's website also said that the measures were taken to "help prevent the spread of COVID-19" and did not mention the Pfizer-BioNTech jab or vaccine side effects.

A journalist at AFP's Tokyo bureau said there was no state of emergency imposed in any regions in Japan as of February 8, 2022.

Moreover, the Japanese poster, which is titled "Let's not get the third dose", makes a string of false claims about Covid-19 and vaccines.

"The Omicron variant is highly contagious, so the number of cases will keep growing rapidly. But it does not bind to ACE receptors (it does not cause thrombosis) and there is nothing to worry about. It's like with the common cold, as severe cases are very rare," the poster reads.

"Especially for children, being vaccinated can have a negative impact on their immune function and development for years. The vaccines have no effect in preventing previous variants, but since they're not working against Omicron at all, getting vaccinated is simply a stock-clearing exercise."

Respiratory expert and former chairman of the Hong Kong Medical Association's advisory committee on communicable diseases Dr Leung Chi-chiu said the claims made in the poster were "seriously wrong".

"Omicron binds to ACE receptors and may cause severe disease and complications like other variants, especially among unvaccinated persons," he told AFP on February 10, 2022.

Dr Siddharth Sridhar, clinical assistant professor at the Department of Microbiology at the University of Hong Kong said there was "absolutely no proof" that Covid-19 vaccines harmed children's long-term immune function and development.

The last line of the poster mentions "Dr Keiji Shimizu" and his medical clinic in the Japanese city of Fukui.

Japanese newspaper Chunichi Shimbun reported in 2012 that a doctor of the same name and working at the same clinic campaigned against flu vaccines.