Facebook posts claim Saudi Arabia's Crown Prince Mohammed bin Salman cancelled a meeting with South Korean President Moon Jae-in during a visit to the Middle East in January 2022. The posts mock Moon and claim the prince ditched plans to see him but maintained a meeting with the Thai prime minister. The claim is false; news reports and photos show Moon met the prince in Riyadh on January 18, 2022.

"Saudi Prince was willing to meet Thai PM. He cancelled on Moon but met Thai PM. It was not even Thai King but just PM, but still willing to meet? Why is no one reporting on this?" reads a Korean-language post on online forum Zuzeri on January 27, 2022. 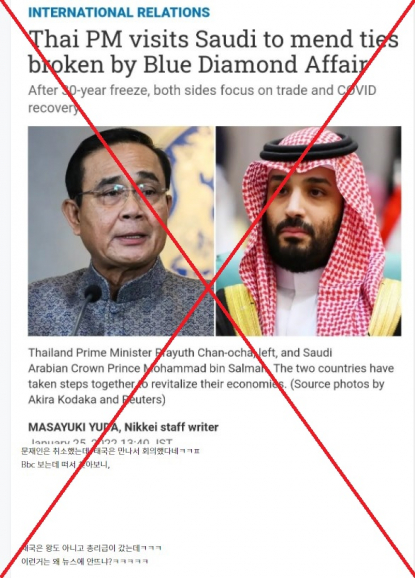 Screenshot of the misleading social media post, taken on February 1, 2022.

Similar claims were shared here on Facebook; and on the South Korean online forums Ilbe and Oeoeoe.

The posts circulated after Moon landed in South Korea on January 22 following a visit to the Middle East.

The state-run Saudi Press Agency (SPA) published photos of Moon's meeting with bin Salman here on Twitter on that day and linked to a statement about the visit.

HRH Crown Prince Holds Session of Official Talks with President of the Republic of Koreahttps://t.co/9dA34tLYFE#SPAGOVpic.twitter.com/Rn5gd2a83V

The SPA published more photos from the visit here in its archives.

The Blue House, South Korea's presidential office, also posted a press statement and photo of the meeting at the Al-Yamamah Palace.

South Korea's presidential office said bin Zayed apologised to Moon for the cancellation, according to a statement from the Blue House.