Video of US charity parade misrepresented as anti-vaccine mandate convoy

Supporters of Canada's "Freedom Convoy 2022," an anti-vaccine mandate protest on wheels, shared a video of a trucker convoy from South Carolina claiming it showed US sympathizers also heading to the rally in Ottawa. This is false; the video was taken in August 2021 in South Carolina during a Special Olympics fundraiser, the man who shot the clip told AFP.

"Freedom Convoy heading from South Carolina up to Ottawa to stand with us Canadians in ending Mandates!" claims a tweet shared on January 24, 2022, the day after hundreds of truckers left Canada's west coast for the capital Ottawa in order to protest a vaccine mandate for cross-border truckers.

The tweet features a video showing dozens of big rigs on a highway, filmed from the driver seat of a semi truck. The video bears the caption "Convoy in SC," shared from TikTok. 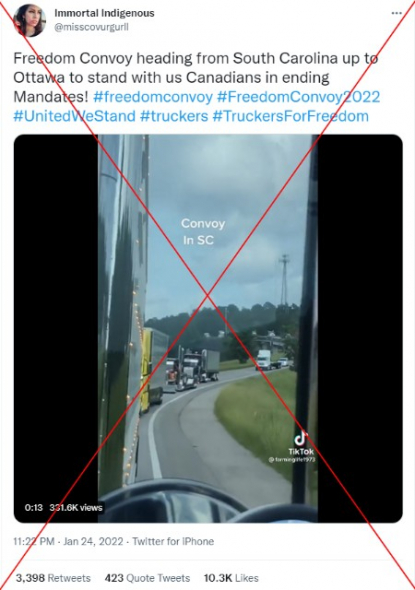 A version of the video posted in the Facebook group supporting the Freedom Convoy 2022, as the rally is called, was shared 17,000 times and has more than 1,300 comments, many enthusiastically cheering on what they believe to be like-minded US allies on their way to Canada.

Canada's vaccine mandate for cross-border truckers went into effect on January 15, 2022. It will affect up to 30,000 truckers who regularly drive across the border, according to the Canadian Trucking Alliance (CTA).

CTA said that "the vast majority of the Canadian trucking industry is vaccinated," but that is not the case for the US trucking industry. The mandate has become a rallying point for those frustrated with ongoing federal and provincial efforts to mitigate the spread of Covid-19, and supporters have greeted the convoy as it rolled through towns.

However, the trucks in the video shared on social media were not on their way to Canada, according to the person who took the video.

The video was originally posted on TikTok on January 24, 2022 by the account @farminglife1973, without any caption. The account belongs to Mitchell Bottomley, the owner of trucking company Bottomley Enterprise. He told AFP that the video showed "the convoy in SC for the Special Olympics."

Bottomley was referring to the Special Olympics in South Carolina, a non-profit organization that aims to provide sports training and competition for individuals with intellectual disabilities.

On August 28, 2021, the organization held its annual truck convoy fundraiser, to which Bottomley brought some of his fleet's trucks, he said.

Footage of the convoy as it drove through Columbia, SC, shows Bottomley's truck at 1:31, bearing the company name and followed by the same vehicles that are visible in his rearview mirror on the TikTok video. 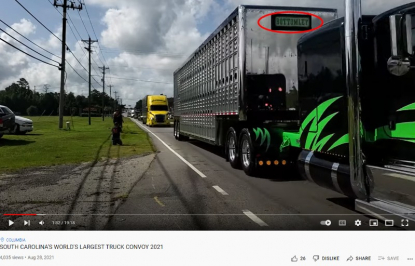 Bottomley's truck is also visible in this Facebook post identifying the context as the August 28 truck convoy. The administrator of the Facebook page, named SC World's Largest Truck Convoy for Special Olympics, confirmed to AFP that the video was from that day.

Some US-based truck drivers did join the Canadian convoy in solidarity, including from Maine, local ABC station WMTW reported. A GoFundMe account asking for donations to cover the truckers' costs on the journey raised more than $5 million Canadian dollars, but has faced questions about how the funds will be distributed.

Other false posts circulating about the rally included claims that it set a Guinness World Record for longest convoy.