Skip to main content
A medical worker prepares a dose of a Covid-19 vaccine at a temporary vaccination centre set up in the Titanic Exhibition Centre in Belfast on December 21, 2021 ( AFP / PAUL FAITH)

As the highly contagious Omicron Covid-19 variant pushed governments to speed up rollouts of booster jabs, social media posts purported to share a poster issued by Britain's National Health Service (NHS) warning that the vaccines "cause Bell's palsy". The claim is false; Britain's health department and local authorities in the town where the poster was displayed said it was not made by the NHS. Bell's palsy, a condition that causes temporary facial drooping, is a rare side effect of Covid-19 vaccines.

"What the hell is going on. They are posting this on billboards. I have personally seen at least a dozen people with Bell’s palsy in the last year," reads a Facebook post shared on January 17, 2022.

The post features a photo of a poster that reads "Public health warning" and "Covid-19 vaccine causes Bell's palsy" alongside the NHS logo and a picture of a woman with a drooping mouth. Text overlaid on the photo reads: "My friend just sent this to me near Heathrow." 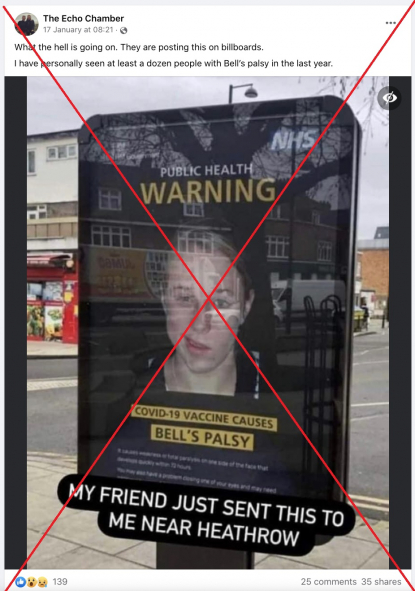 Bell's palsy is a temporary weakness or lack of movement affecting one side of the face, according to the NHS website.

The same photo was shared in similar Facebook posts here and here and in Twitter posts in various languages, including Italian and Spanish.

"This isn't a genuine poster," a spokesperson for Britain's Department of Health and Social Care told AFP on January 14, 2022.

AFP located the poster featured in misleading posts to a street in west London using visual clues in a wider photo of the poster taken from a different angle and posted on Twitter.

Visual features in the photo correspond to images on Google Street View of the corner of Botwell Lane and Pump Lane in Hayes, a town six kilometres (four miles) from Heathrow airport. 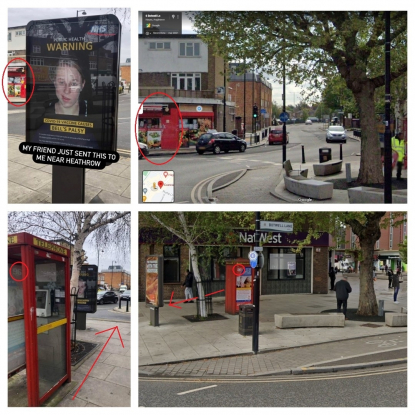 A comparison of photos posted on social media (left) and screenshots taken on Google Maps (right), showing the location of the billboard. AFP has added the red markings.

A representative for the borough of Hillingdon, where Hayes is located, said the posters had been taken down.

"We are aware of these posters and have reported them to our NHS partners. They were also reported to JCDecaux who own the billboards and immediately removed," the spokesperson told AFP on January 20, 2022.

"Let’s claim back bus stop ad spaces and replace them with the truth," reads the first message posted in the group on December 28, 2021. 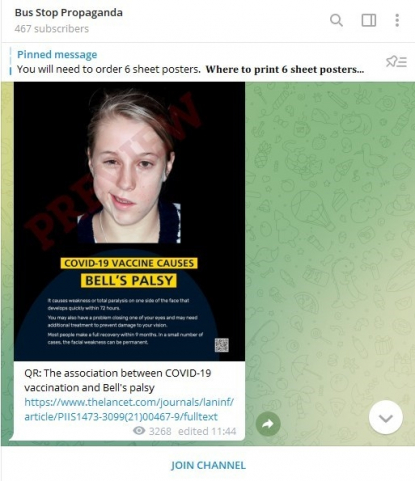 Screenshot from the Telegram group featuring the fake NHS poster, as of January 19, 2022.

Many of the posters feature the logo of the NHS or the UK government that are similar to those featured in genuine public health campaigns.

Below is a comparison of a genuine NHS poster (left) and the fake poster circulating online (right). 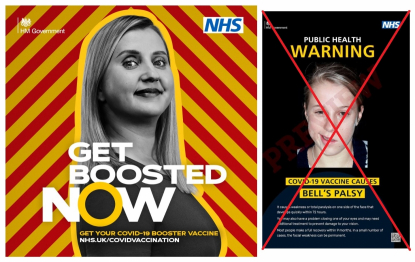 The UK medical regulator MHRA lists Bell's palsy as a rare side effect - meaning it may affect up to 1 in 1,000 people -- for the AstraZeneca, Pfizer-BioNTech and Moderna's Spikevax vaccine, which are all approved for use in the United Kingdom.

The MHRA said it was monitoring cases of Bell's palsy after Covid-19 vaccination. It pointed out that the condition was "known to be associated with a number of infectious diseases, including the SARS-CoV-2 virus".

A QR code on the fake NHS poster shared on Telegram links to an article published in August 2021 in medical journal The Lancet, titled "The association between COVID-19 vaccination and Bell's palsy".

It concluded that while more data was needed on vaccine-associated facial paralysis, "one certainty remains: the benefit of getting vaccinated outweighs any possible risk".