Skip to main content
The American Museum of Natural History opens to the public on September 9, 2020, in New York City ( AFP / Timothy A. Clary)

Online articles claim a young girl was arrested at the Natural History Museum in New York City for refusing to show proof of vaccination. This is false; the New York Police Department (NYPD) and the museum say the girl was brought by adults protesting the city's vaccination requirement, and that she was escorted from the building while the others were arrested for refusing to leave at closing time.

"NYPD Arrest 9-year-old girl for not showing vax papers at museum," said the headline of a January 22, 2022 article by "The Liberty Loft" website, which issued a correction after the publication of AFP's fact check. 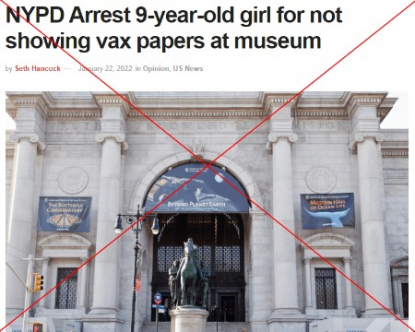 Screenshot of an online article taken on January 24, 2022

New York City requires proof of vaccination for indoor dining, fitness centers, and venues including museums. Such mandates are a divisive issue and have sparked protests in the city and elsewhere in the United States.

However, the girl referred to in the articles was not arrested, and police were not called because the group failed to show proof of vaccination.

NYPD Sergeant Edward Riley told AFP that six protesters and a young girl were denied entry to the famous museum on January 19 for refusing to show proof of Covid-19 vaccination.

The protestors then "stayed in the lobby of the museum and refused to leave," Riley said, remaining beyond the 5:30 pm closing time.

At that point, "officers were called to the location and arrested the protestors at approximately 6:00 pm for refusing to leave the property when lawfully asked by museum employees and the NYPD due to the museum being closed."

The young girl was not arrested, Riley said. "One of the protestors had a daughter with her. No enforcement was taken against the young daughter."

A video posted on Twitter by an account that says it is "reporting on the Anti-mandate movement in NYC" shows the adults were handcuffed when they were taken out of the museum, while the young girl was not.

"At closing time, they (the protesters) refused to leave and were arrested by the NYPD and escorted out of the Museum. Among the group was a child, who was not arrested," she said.

Canty said the protesters arrived between two and three in the afternoon, suggesting that they remained in the lobby for up to three hours before being removed by police.

New York Freedom Rally, an organization that describes itself as "citizens for informed consent," referred to the protesters as "Our Freedom Fighters" in a Facebook post, but did not confirm whether the group was affiliated with the organization.

In a separate post, the organization deplored the arrest of the protesters, and specified that the young girl was escorted, not arrested.