Skip to main content
Shoppers at a fruits and vegetables market in the suburb of Cabramatta in Sydney. ( AFP / SAEED KHAN)

A video featuring the founder of a far-right US-based website claims scientists can now genetically modify crops in order "to cause infertility in black people" by using a specific type of technology. This is misleading; experts told AFP the video misrepresents a natural process that has evolved in plants as a defence against viruses, which they said is not harmful to humans.

The man narrating the misleading clip is Mike Adams, founder of the US-based website Natural News. He has previously been flagged for sharing misinformation here by US-based fact-check site PolitiFact.

In the video shared here by an Australia-based user on Facebook on January 8, 2022, he says: "They've now found a way to cause food crops to grow RNA fragments that can be specifically targeted like bioweapons to interfere with the physiological processes of targeted species that might eat the food".

He continues: "Food crops can be engineered right now based on existing technology to cause infertility in black people alone. That technology is a reality." 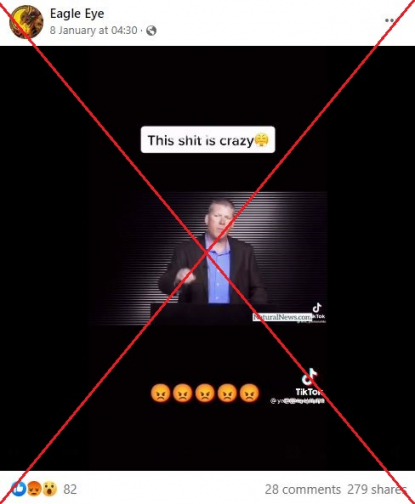 The three-minute clip has been viewed more than 13,000 times in multiple Facebook posts around the world since at least 2018, including in the UK, US, and Canada.

A similar claim was also shared here by Natural News in November 2017.

RNAi technology is a natural gene-silencing mechanism that has evolved in plants and animals as a defence against viruses.

Health experts said it was impossible to create crops that use RNAi technology in order to harm people.

"The likelihood of harmful RNAi being orally ingested and actually having an effect is zero," Professor Nigel McMillan, a cancer researcher at Griffith University in Australia told AFP.

He said people ingest RNAi in food and it has no harmful effect on their bodies.

"Because they are incredibly delicate, RNAi won't last [after being ingested orally]. We have enzymes that chew it up on our skin and through our bloodstream," he said.

McMillan -- who has developed an RNAi-based Covid-19 treatment -- highlighted a 2020 review that addressed concerns about RNAi technology.

It found the "presence of multiple biological barriers at the gastrointestinal, bloodstream, and cellular levels" stops RNAi from having an effect on mammals when ingested.

The University of the Sunshine Coast's Dr Tomer Ventura -- who pioneered gene-silencing in prawns -- said it was not possible to use RNAi technology to create infertility in certain races.

"The genes involved in our reproductive capacity are not different between races, so as far as I can tell that’s not something that is feasible," he told AFP.