A collage of three images of roadblocks has been shared widely on Facebook in Ethiopia with claims that the pictures show recent demonstrations in the town of Kobo, 200 kilometres south of the Tigrayan capital Mekelle. However, the claim is false: while all the images depict scenes in Ethiopia, they are old and unrelated to the current conflict.

The Facebook post, archived here, has been shared more than 950 times since it was published on January 17, 2022, on a page called “Wolkayt Tegedie Amhara Revolution”, which carries mostly pro-Amhara content. The post generated 2,200 likes and more than 300 comments.

Written in Amharic, the caption claims that Ethiopian soldiers in Kobo were ordered to leave the area by a field marshal from an allied party, but were stopped by Fano and local militias who demanded their weapons in return for safe passage out of the city, essentially causing a standoff.

“All roads have been blocked by locals and if ENDF wants to leave Kobo, it will be without weapons,” reads part of the caption. ENDF refers to the Ethiopian army, while the Fano group is an Amharic nationalist movement. Kobo is in the Amhara region.

The roadblocks, according to the post, were set up in an attempt to ambush fleeing rebels of the Tigray People’s Liberation Front (TPLF). Three images of the purported roadblocks were published with the post. 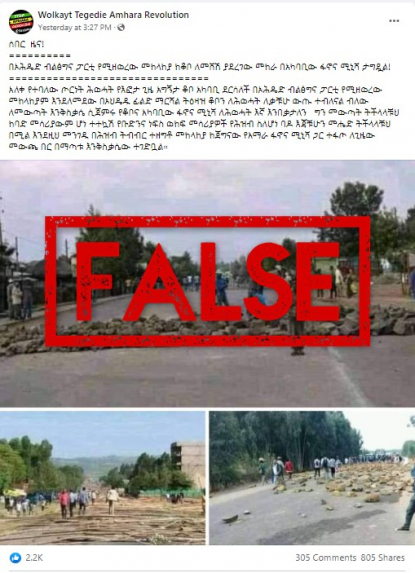 Conflict in Ethiopia broke out in November 2020 when TPLF rebels reportedly attacked a military command post in the northern region of Tigray. In recent developments, United Nations Secretary-General Antonio Guterres said he saw a “real opportunity” for an end to the war in Ethiopia after holding talks with the African Union’s special envoy, Olusegun Obasanjo.

However, while the images were taken in Ethiopia, they are old and unrelated to the conflict in Tigray, and do not show roadblocks in Kobo.

The first image was found in an article published by local media Tadias on December 15, 2015. The story, “Ethiopians on Edge as Infrastructure Plan Stirs Protests”, originally published by the New York Times, described growing tensions in Wolenkomi, a city on the outskirts of the capital that saw protests against a government plan to expand Addis Ababa. 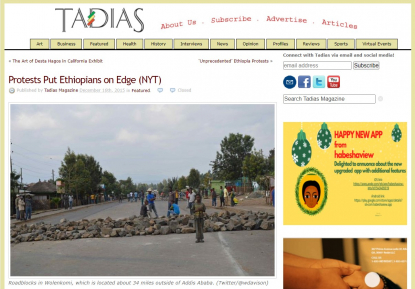 Screenshot of Tadias’s webpage with the same image used in the false Facebook post, taken on January 20, 2022

The second image, showing a street obstructed by rocks, was traced to a Facebook post published by a page called “Bahirdar Press” on March 11, 2019. Written in Amharic, the post’s caption describes roadblocks between the cities of Hamusit and Gondar in the Amhara region during protests against the abuse of Amharas.

According to a report published by the UN Office for the Coordination of Humanitarian Affairs in March 2019, “tensions and sporadic conflict” between the Amhara and Qemant communities resulted in more than 90,000 people being displaced in the region. 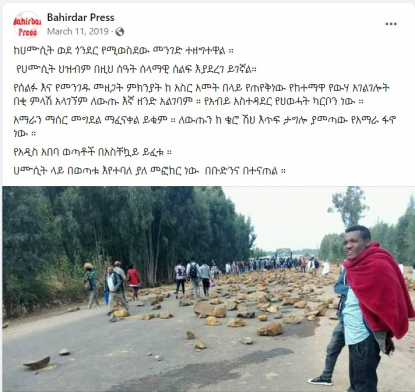 Screenshot of the Bahirdar Press report on Facebook, taken on January 20, 2022

The last image showing logs and saplings covering a road was traced to a local media website called Nazret. It shows roads blocked in the city of Ambo, 100 kilometres west of Addis Ababa, in 2017.

The article called the city a “hot spot for anti-government demonstrations” and described protests against the federal government proposal to expand Addis Ababa’s boundaries, also referred to as “the master plan”. 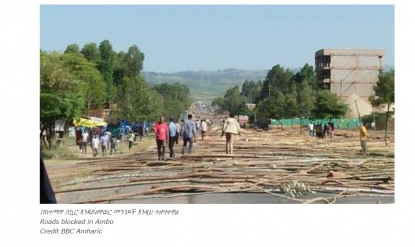 Screenshot of the same image found on Nazret, taken on January 20, 2022

Since the war broke out 14 months ago, fighting has displaced millions of people and pushed hundreds of thousands to the brink of famine, the UN has said. In a bid for national dialogue, Ethiopian authorities pardoned a number of high-profile political prisoners, including a prominent founder of the TPLF party.