A video has been shared repeatedly in social media posts that claim it shows an anti-vaccine protest by the French police. The posts circulated after protesters in France demonstrated against tighter restrictions for unvaccinated people in January 2022. But the video has been shared in a false context; it actually shows French police officers protesting against police reforms proposed by the then-French interior minister Christophe Castaner in June 2020.

The video was shared here on Facebook on January 4, 2022.

The one-minute and six-second video shows a group of people throwing pairs of handcuffs onto the street in front of the Arc de Triomphe in Paris.

"French police throw down handcuffs in anti-vaccine protest," reads the Korean-language caption of the post.

The superimposed text on the video reads: "French police ditched handcuffs by saying they would join people in the anti-vaccine protests".

Protesters took to the streets in cities across France in January 2022 to reject new restrictions for those who are not vaccinated against Covid-19.

The same video has been shared alongside a similar claim on South Korean social media platforms -- including Naver Cafe and Kakao Story; as well as on YouTube here and here.

The video actually shows French police protesting in June 2020 over claims of racism in their ranks by the then-French interior minister, Christophe Castaner.

AFP reported that protests broke out in Paris, Lille, Marseille and other French cities after Castaner pledged "zero tolerance" for police racism.

A closer analysis of the footage found the commentator in the clip is well-known French journalist Rémy Buisine, who regularly broadcasts demonstrations live on Facebook for the news portal Brut.

The video seen in the misleading posts is an edited version of this longer, higher-quality clip.

Below is a screenshot comparison of the video shared in the misleading posts (L) and the original live video posted on Brut’s Facebook page (R): 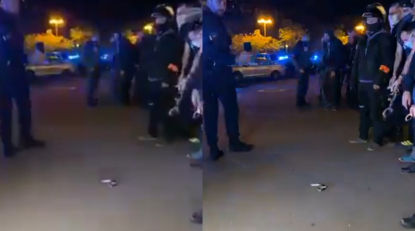 In the original video, Buisine can be heard describing the scene next to the Arc de Triomphe.

He says the police officers were angered by Castaner's comments, specifically his suggestion that police would be banned from using chokeholds to detain suspects.

"They are demonstrating because they were deprived of the so-called strangulation technique for arrest (...) they hope that the government will reverse their decision," he says.

"[The police officers were] offended by the statements made by the interior minister."

AFP reported on the same protest by French police next to the Arc de Triomphe here.

In July 2021, France banned police officers from using chokeholds, a move derided by many officers as an unfeasible concession that could make their jobs more perilous, AFP reported.