An MRI scan of a mother and her child has circulated in multiple social media posts that claim it shows them releasing oxytocin, a hormone known for creating soothing sensations during pleasant social and physical interactions. The posts are misleading; AFP found the scan has been manipulated to highlight parts of the pair's brains. The original scan — featuring a Canadian neuroscientist with her son — was taken for a study on infants' brains. The scientist said that the annotations "have nothing to do with oxytocin, hormones, kissing, or breastfeeding".

The image was shared by an Australia-based Facebook user here on January 8, 2022.

The post claims it shows "the first MRI of a mother kissing her baby".

"Her kiss has caused a chemical reaction in her baby’s brain that released a burst of oxytocin (a hormone that produces feelings of affection and attachment)," the post reads.

Parts of the pair's brains appear illuminated in the image, which the post says is evidence of "love". 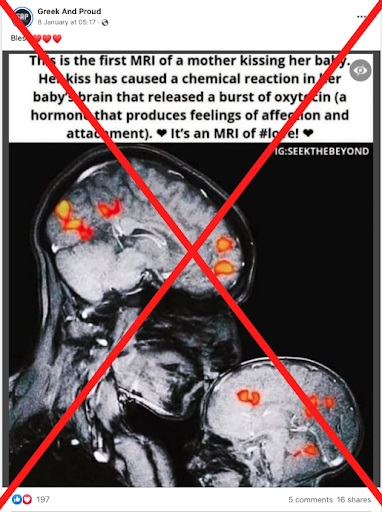 Magnetic Resonance Imaging (MRI) is a non-invasive imaging technology that uses magnets to create a three-dimensional image of tissues inside the human body.

Oxytocin is a hormone that is thought to create social, familial and romantic bonds, AFP reported here. It is released during breastfeeding, as well as during sex and even a warm hug.

The image has been shared by other Australia-based Facebook users alongside a similar claim here, here and here.

A reverse image search of the scan found it had been manipulated to highlight certain parts of the pair's brains.

It was originally published in this December 2015 article on the website for the Smithsonian Institution in Washington, DC.

It is titled: “Why I Captured This MRI of a Mother and Child”.

Below is a screenshot comparison of the image shared in the misleading post (L) and the genuine image (R): 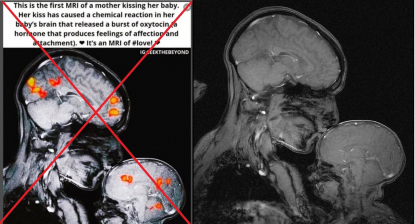 The article was written by Rebecca Saxe, a cognitive neuroscience professor at IT Massachusetts Institute of Technology.

She wrote that the image shows her with her infant son but was "not made for diagnostic purposes, nor even really for science".

"No one, to my knowledge, had ever made an MR image of a mother and child. We made this one because we wanted to see it," she wrote.

The Canadian neuroscientist also wrote about the origins of the image in this thread posted to Twitter in September 2019.

My MRI Mother and Child has become the focus of a controversy this weekend.

She said her study, which was eventually published in 2017, sought to understand how infants’ brains react to images of faces and natural scenes.

In an email to AFP, Saxe said her then-graduate student included annotations on her MRI scan to reflect the study's findings . The image was later reshared in misleading posts.

The annotations "have nothing to do with oxytocin, hormones, kissing, or breastfeeding", she said.