A video has been viewed thousands of times in multiple Chinese social media posts alongside a claim it shows bodies of Covid-19 victims being dumped into a shipping container in the US. The posts circulated online as the US recorded thousands of daily Covid-19 deaths. But the video has been shared in a false context: it actually shows a scene from a fictional American television drama.

The video was published here on Douyin, the Chinese version of TikTok, on January 6, 2022. 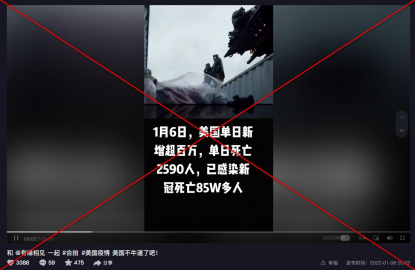 It appears to show a truck dumping bodies into a shipping container.

The simplified-Chinese text superimposed on the video translates as: "Jan 6, US reported more than a million cases in a day, with 2590 people died in one day, more than 850K people have died from Covid-19".

As of January 24, it has recorded 868,318 deaths from the disease since the beginning of the pandemic, according to an AFP tally.

The video was titled: "#USCovid-19 US ain’t cool anymore!"

Some social media users appeared to believe the video really shows dead bodies being dumped in the US.

"So scary, and the person standing there wasn't even wearing a mask," one user commented.

Another wrote: "This is typical US -- arrogant."

The same video was also shared on Douyin here and here alongside a similar claim.

In fact, the footage was taken from a fictional American drama.

A combination of reverse image and keyword searches on Google found the video was actually taken from US fictional television drama The Stand.

Further investigation found a longer version of the video published on a Chinese-language YouTube channel as a movie review.

"A biochemical lab, that belongs to the US, has leaked. It caused a catastrophe to the human species," the text overlay the video reads.