A photo of logs scattered in a residential area has been shared hundreds of times on Facebook alongside a claim it shows the situation in Pahang, one of seven Malaysian states hit by flooding in late December 2021. But the photo has been shared in a false context: it has circulated since at least 2013 in reports about an accident in Malaysia's Kelantan state.

The image was uploaded on Facebook here on January 1, 2022.

It has been shared more than 80 times.

The post's Malaysian-language caption translates as: "LUCKY for the people of PAHANG… The government delivers logs right outside the house too." 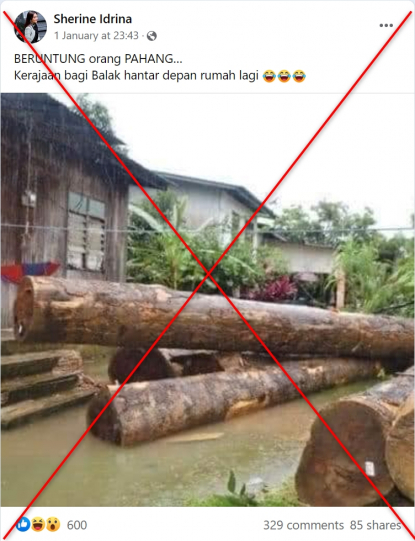 The post appears to mock an investigation by the Pahang forestry department which found that illegal logging had not contributed to wood debris washing up in the floods.

The investigation was reported here by Malaysian newspaper The Star on December 30, 2021.

The picture has been shared more than 1,200 times after it began to circulate in late December 2021 alongside a similar claim on Facebook, such as here, here, here and here.

A reverse image search of the image found that it had been used in this news report from Malaysian news portal Harian Metro from February 27, 2013.

It is about logs hitting a house in the state of Kelantan after a trailer accident.

The article, translated from Malaysian to English, is titled: "Logs bring bad luck."

The same article and photo was included in several local blogs published on the same day here and here.

Below is a screenshot comparison of the photo in the misleading Facebook post (L) and the photo published in 2013 (R):