A popular tweet claims a photo of Plymouth Rock in the US indicates sea levels are not rising quickly, as the monument has stayed "in the exact same spot" for hundreds of years and it is not underwater. This is false; the boulder has been moved and fragmented over the years, and scientists agree that sea levels are rising due to global warming -- including in New England.

"This is Plymouth Rock. It has lain here for 400 years. It was exposed to the oceans in 1620 & is in the exact same spot today," says a July 2, 2022 tweet with tens of thousands of interactions.

"Oceans have failed to rise the few centimetres need to cover the rock with seawater. This is a clear message about how little earth's oceans are rising." 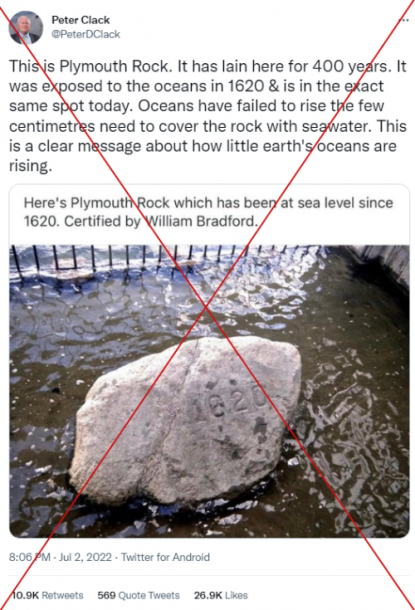 The landmark, located in Plymouth, Massachusetts, is said to be where the Pilgrims first set foot in 1620 after disembarking from the Mayflower.

"Although no historical evidence exists to confirm Plymouth Rock as the Pilgrims' actual steppingstone to the New World, the boulder was identified as this spot in 1741, 121 years after the arrival of the Mayflower," the town says on its website.

However, the rock has moved since then -- and it does not disprove the science of climate change.

Rock has been split, moved

In the book "Plymouth Rock's Own Story," historian Jim Baker wrote that the monument has been moved and manipulated throughout its history.

Baker says the rock offers "probably no useful evidence" about sea-level rise since it has been "raised and lowered several times," according to a statement sent to AFP by a Plymouth spokesperson.

The boulder may have first moved in 1749 when a wharf was built around it, Baker wrote in "Plymouth Rock's Own Story."

A few decades later, in 1774, the top half of the rock was moved next to a liberty pole in Plymouth's town square. It remained there until 1834, when it was moved in front of Pilgrim Hall Museum, according to Connor Gaudet, the museum's digital collections and programs manager.

As for the lower half, when Plymouth Rock was split in 1774, it was "apparently elevated on timbers so that the upper face was level with the wharf surface, roughly five feet above the shore," Baker said in the statement.

"When the restored rock was installed for the last time in 1921 (with half below the ground), it was lowered back to the assumed original shore level, but whether accurately or not is unknown," he said.

Contrary to the claim in the tweet, Plymouth Rock has been covered with seawater.

The Massachusetts Department of Conservation and Recreation told AFP that the rock "has been fully submerged during King Tide events in the past," adding that daily tides around Plymouth Rock rise and fall about 9.76 feet.

"Any comparison of water levels would need to be done using a consistent tidal stage," the department said in an email.

A 2020 report conducted by the Metropolitan Area Planning Council (MAPC), a regional planning agency in Boston, said the sea level in Boston Harbor -- located about 40 miles north of Plymouth -- had increased by 0.93 feet over the past century. 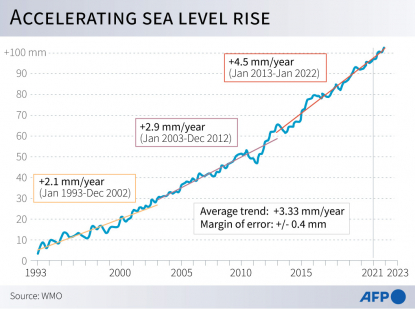 "Sea-level rise in Massachusetts results from (a) confluence of several factors, the most significant is caused by global warming," the report said.

It also said the ocean in New England had "warmed more than 2.5° F since 1901, more than any other coastal area in the US and 40% faster than anticipated."

Todd Ehret, an oceanographer at the National Oceanic and Atmospheric Administration's (NOAA) Center for Operational Oceanographic Products and Services, told AFP that all sea-level trend stations in the area "show a rate of sea-level rise between 2.5mm per year (and) 3.0mm per year."

Jayantha Obeysekera, director of the Sea Level Solutions Center at Florida International University, previously told AFP that rising oceans were "a matter of when, not if."

AFP has debunked other inaccurate claims about climate change here.