Ahead of Ferdinand Marcos Junior's victory in the Philippine presidential election, an image of a news report was viewed tens of thousands of times in social media posts that claim it shows how his top rival Leni Robredo and the family of late president Corazon Aquino "fooled Filipinos in the past". The image has been shared in a false context; it actually shows an AFP report about a pro-Marcos misinformation campaign that revamped his family brand and smeared Robredo.

The image shows an article in The Standard, an English-language newspaper in Hong Kong, with the headline "Filipinos fall for fake history".

"Pity on you yellow-pinks and the Aquinos, a Newspaper from another country indicates how you fooled Filipinos in the past, you made them believe the lies for your own interest," reads the Tagalog-language text overlaid on the image.

"Yellow-pinks" is a pejorative term used to describe the camp of Vice President Leni Robredo who adopted pink as her presidential campaign colour.

She is also the chairperson of the yellow-themed Liberal Party.

The post also refers to the Aquinos -- the family of democracy icon and former president Corazon Aquino -- who succeeded the deposed dictator Ferdinand Marcos in 1986. 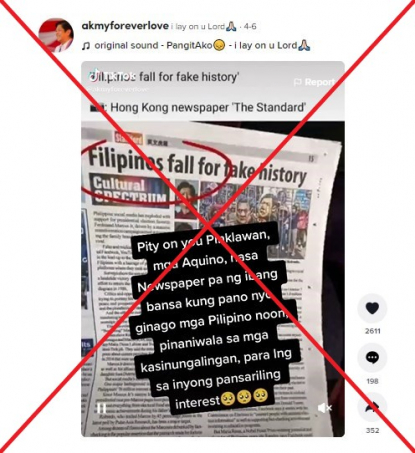 The photo was also shared alongside a similar claim on Facebook here and here.

Comments on the posts suggested some people were misled by them.

"Even a Hong Kong newspaper said the news is biased in the Philippines," one wrote.

"True! The Yellow-pinks have fooled us. We won't be fooled by your lies again!" another commented.

But the image has been shared in a false context.

The report talks about the misinformation campaign that revamped the Marcos family's image and propelled Marcos Jr as the presidential frontrunner -- not how the Aquinos and the camp of Robredo "fooled Filipinos".

The Standard published the AFP article with the headline "Filipinos fall for fake history" on March 30 here.

Below is a screenshot comparison of the image in the misleading post (left) and the original AFP report published by the Standard (right): 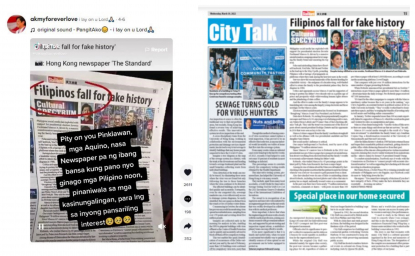 False and misleading claims flooded Facebook, YouTube, TikTok and Twitter in the lead-up to the May 9 polls, pounding Filipinos with a relentless barrage of propaganda on platforms where they rank among the heaviest users in the world.