Published on Tuesday 24 March 2020 at 19:10
A video purporting to show a strange creature floating in the sky under heavy rain has been viewed thousands of times on Facebook. The claim is false; the video was created by a Malaysian artist using computer graphics software.
Read more 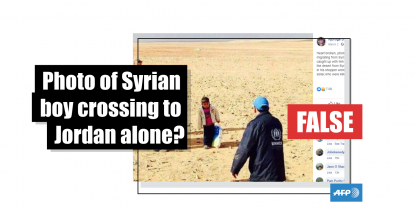 Published on Friday 6 March 2020 at 12:40Updated on Friday 6 March 2020 at 13:00
An image of a little Syrian boy surrounded by UN staff in the Jordanian desert has been shared thousands of times on Facebook, with claims that he migrated into Jordan alone. The claim is false; the boy was crossing the desert with a group of migrants when he was separated temporarily from his mother, but later reunited with his family over the border.
Read more 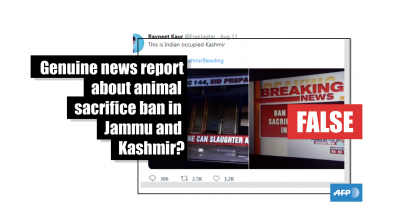 Published on Thursday 15 August 2019 at 11:00
Images purporting to show a television broadcast by an Indian news channel have been shared hundreds of times in multiple posts on Twitter and Facebook which claim animal sacrifices were banned in Jammu and Kashmir ahead of the Muslim Eid al-Adha festival. The claim is false; the Indian news channel said the images were doctored and that it has not broadcast the story; an AFP photographer captured photos of livestock on sale in Jammu and Kashmir one day prior to Eid.
Read more 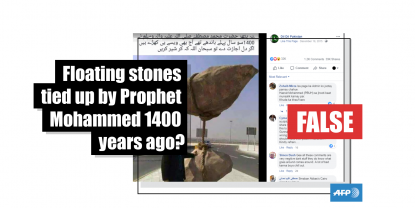 Published on Wednesday 14 August 2019 at 11:15
A photo has been shared thousands of times in multiple posts on Facebook which claim it shows stones tied up by the Prophet Mohammed 1400 years ago. The claim is false; the photo shows a sculpture created by an Egyptian artist for Cairo International airport in 2008.
Read more Published on Tuesday 13 August 2019 at 09:55
A video showing clashes in a residential area has been viewed hundreds of thousands of times in multiple Facebook posts published in August 2019 which claim it shows Indian military officers attacking Kashmiri Muslims. The claim is false; the video has previously circulated in media reports about clashes which broke out in northern India in 2017 after a religious leader was found guilty of rape.
Read more