Skip to main content
A silhouetted view of the skyline in Toronto, Ontario, on July 10, 2015 (AFP / Jim Watson)

2016 photo of tank in Toronto resurfaces amid COVID-19 outbreak

As a special task force assembled earlier this month to help in the handling of the COVID-19 outbreak, a photo of a tank on Toronto’s Dundas Square surfaced on social media. However, the photo was taken in 2016 during a festival and no tanks were used to move troops throughout the Greater Toronto Area, army representatives told AFP.

“This is happening Downtown Toronto apparently,” a Facebook user wrote on April 6 alongside a photo showing a tank, flanked by three Canadian military officers in uniforms while civilians look on. 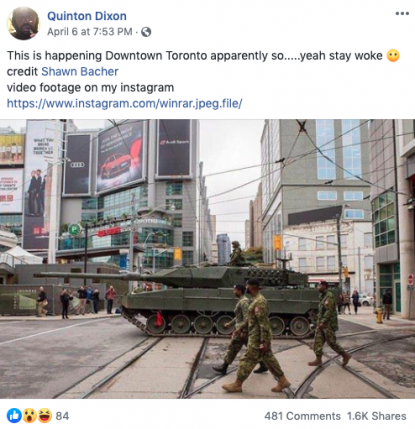 The photo is genuine and it was taken in Toronto, but not in 2020 and it is unrelated to the novel coronavirus.

“This is not a current picture,” Lieutenant Nadine Abou Rjeily, spokeswoman for the 4th Canadian Division told AFP by email, adding that the photo was taken almost four years ago during Toronto’s Nuit Blanche, an all-night contemporary art event.

A Google reverse image search confirms that the photo was published on the Canadian Armed Forces account on October 3, 2016, two days after Nuit Blanche took place. The 4th division’s media team is credited for the photo. The Instagram account that the Facebook user claimed has video footage of the tank is private. The user refused to provide access to AFP.

A search on Google Street View shows that the photo was taken on the eastern end of Dundas Square, on Victoria Street.

Residents of the Greater Toronto Area were warned on April 5 that military vehicles and personnel would be circulating as troops head to Base Borden, approximately 100 kilometers north of Toronto. However, no tanks were involved.

“There are no tanks deployed in the streets of Toronto and the vehicles being used to move the troops from the Greater Toronto Area and to CFB Borden are military logistics vehicles, buses, and civilian pattern passenger vehicles,” Abou Rjeily told AFP.

Some 550 military personnel from across Ontario had arrived at the base by April 6, where they formed a Territorial Battle Group “ready to support any request of assistance required,” said Abou Rjeily.

Daniel Lebouthillier, a spokesman for National Defence, lamented the publication of false information during the COVID-19 pandemic. “The risks and impacts of misinformation during this critical period are real and need close and careful monitoring,” he said by email.